Is Bensu Soral divorcing her husband? 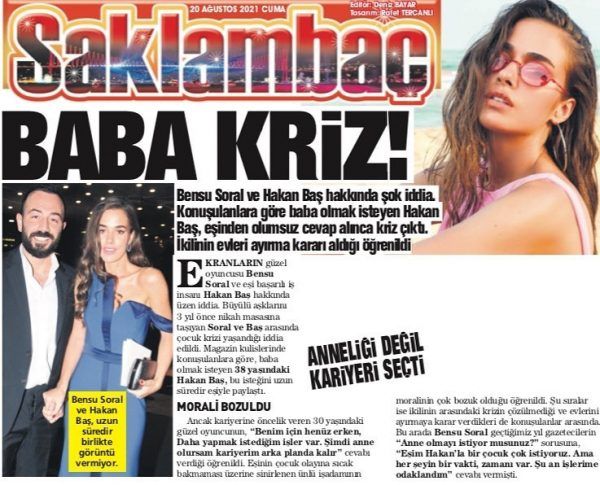 Bensu Soral left her husband! Bensu has a new boyfriend! Bensu Soral’s husband bought a house for his mistress! – the headlines in the Turkish press are impressive. However, is it really so? What do the people concerned say?

According to Turkish media reports, Bensu Soral and Hakan Bas decided to break up. The reason for the crisis between the spouses was Bensu’s reluctance to have children right now, as she is focused on her career. The actress’s husband was very upset with such a statement, they had a big fight, after which Bensu packed up her things and left.

An even bolder statement followed. It was alleged that Hakan Bas did not waste time and is already dating model Mina Ceran, the couple were noticed in one of the clubs in Emirgan. Moreover, he allegedly even bought a house for his new girlfriend. Mina dismissed such insinuations, bitterly saying that in Turkey, if a woman makes money herself and buys real estate herself, it is considered incredible and people start always looking for a man. However, she has too much respect for the people mentioned in this news to give any comments. She just wants to defend her good name. There is nothing of the kind, and never has been.

The photographs of Bensu Soral and her co-star on the series Glass ceilings Kubilay Aka made in the club  were published in the press  with a hint that mutual sympathy arose between the young people. However, as it turned out, the photos were taken a couple of months ago on the set of the show.

Bensu and Hakan were quick to explain the situation surrounding their marriage. While acknowledging that they were going through tough times, they also revealed that the person mentioned in the news is a longtime friend of theirs, so hanging out with friends together shouldn’t be questionable. The couple asked the press to be more delicate. Then Hakan Bas gave a short interview to the TV show I can’t help but say / Söylemezsem Olmaz. He admitted that he and his wife have been going through a difficult period in the last month, but they are making every effort to overcome mutual disagreements. When someone begins to comment on family problems, they become even more complex, so he asks for tact.

It looks like the couple are really in crisis, however they still show up together at formal events and weddings. This gives hope that the situation will be resolved. After all, every married couple goes through crises and not all marriages fall apart.