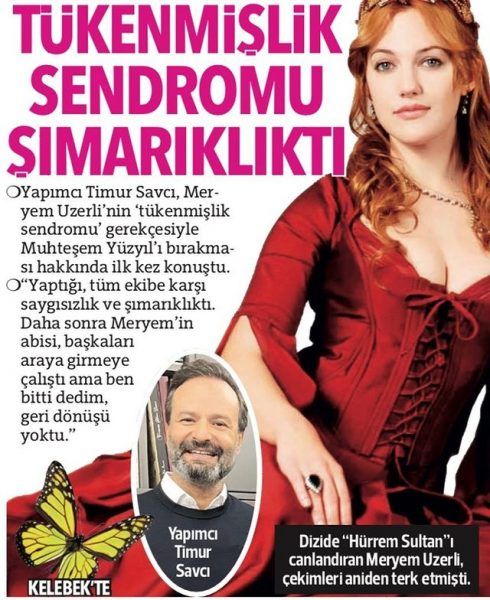 The series Magnificent Century / Muhteşem Yüzyıl has become the most successful Turkish television project in the world, which has already been watched by 500 million viewers. However, there was a big scandal on the set that made the audience very sad. We learned the details of what happened.

Producer Timur Savci, who became a guest of the YouTube channel Hayat Okulu, admitted that he was very upset by the situation with Meryem Uzerli. As a reminder, she ran away from the filming of The Magnificent Century due to Burnout Syndrome.  With only one to one and a half months remaining until the end of the season, the team had to work hard to justify the absence of the main character.

Timur Savci, not hiding his bitterness, said that Meryem had set up the whole team, ruined all the work. It was so unexpected. Usually, in situations like this, he has the stamina of a serial killer. Meryem’s brother contacted him, and tried to negotiate, Meryem was ready to return, but Savci said “no, it’s over, you don’t have to come back.” Recall that Vahide Perçin came to the aid of the producer, and became the new Hurrem Sultan.

Turkish serials are filmed at the same time as the airing on television, and the situation when something happens to the actors is not new. However, Turkish show business is cruel and does not forgive such behavior. Apparently this is why Meryem Uzerli’s career in Turkey did not work out. She remained an actress who played only one role, unusable for anything else. She is now taking steps to return to Turkish screens. Will she succeed?