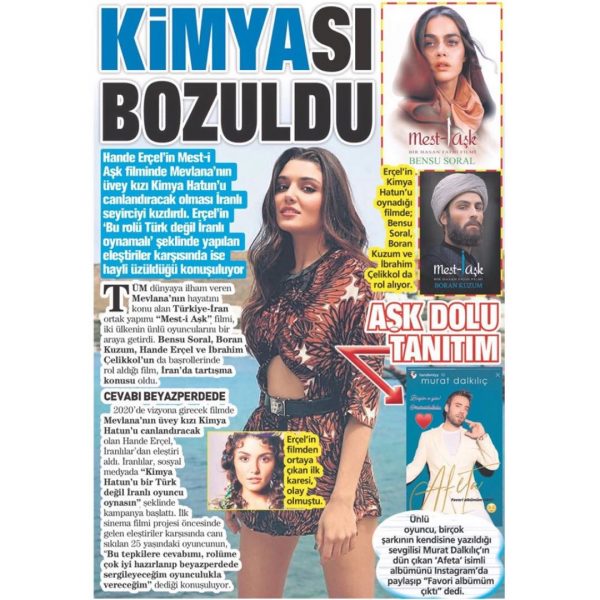 Hande Erçel is certainly one of the most beautiful Turkish actresses. However, Iranian social media users started a campaign against the girl. What happened?

The shooting of one of the most anticipated Iranian-Turkish films Mest-i Aşk, devoted to the life of the famous poet Mevlana produced by ENG Yapım Medya and Simarya Film continues in the Turkish city Konya .  The director and screenwriter is Hassan Fethi. The leading actors in the movie are: Parsa Pirouzfar, Shahab Hosseini, Bensu Soral, Boran Kuzum, Hande Erçel, İbrahim Çelikkol, Boran Kuzum, Burak Tozkoparan and Selma Ergeç.

We remind you that the Iranian clergy have already banned the demonstration of a future film in the country on the pretext that this is propaganda of Sufism, to which Shiites are very ambiguous. However, this did not stop Iranian viewers from closely following the shootings and vigorously expressing their position. In particular, they were very unhappy that the stepdaughter of the poet Kimya Hatun would not be played by an Iranian actress, but by the young Turkish star Hande Erçel. We remind you that for a girl this will be the first role on the big screen.

The campaign in Iranian social networks against Hande started. The users demand that the creators of the project replace the actress. However, as it became known, they do not intend to follow the disgruntled audience and Hande will remain in the film. The actress herself said that she will give an answer to criticism addressed to her by playing in the movie, she will try to be on top.

Whether the young girl will cope with such pressure and whether she can give her best performance, we will find out in 2020, when the film will be released on the screens. We can only wish good luck to Hande.