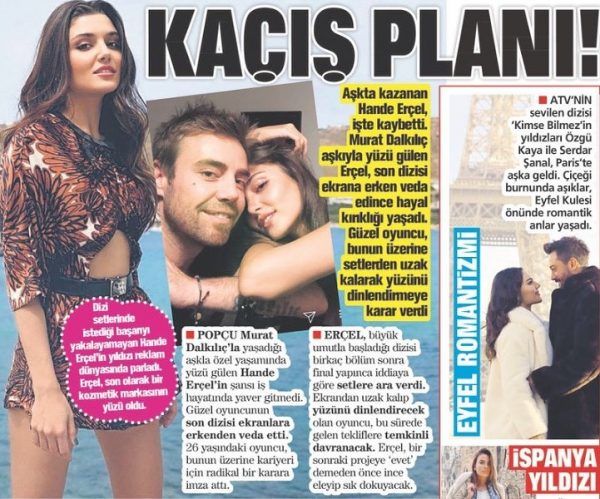 She is one of the most beautiful Turkish actresses. Her popularity on social networks is phenomenal. However, alas, the series starring Hande Erçel do not enjoy the attention of the Turkish audience. What will the actress do after canceling her latest project, Azize?

Hande Erçel is one of the most popular Turkish actresses on social networks. 11 million 600 thousand people follow her on Instagram. Her photos are gaining more than a million likes. However, alas, this popularity does not affect the series in which she stars.

None of the projects of the young actress has become a hit. Güneşin Kızları / Sunshine Girls, Aşk Laftan Anlamaz / Love Doesn’t Understand Words, Siyah İnci / The Black Pearl caused a lot of interest in social networks, but they did not even have 4 million viewers. So these shows did not even become hits. The series Halka / The Ring turned out to be a real failure. It was watched by 2 million 190 thousand viewers. The project had 19 episodes only because of the state channel TRT1 that broadcasts even lowest-rated shows. Alas, the TV series Azize, that was released on TV channel D, suffered an even more sad fate. It was taken off the air without a final in the 6th episode.

As it became known, after a series of failures, Hande decided to take some time out and move away from the Turkish show business. From now on, she will choose scenarios more carefully. Some journalists have already advised the girl to pay attention to digital platforms, especially since she is popular in social networks, so the choice will be more than logical.

Note that Hande will not be left without work. In the near future she will be busy preparing the cartoon Dolyphant as scriptwriter. After the largest Hollywood studio Dreamworks became interested in this project of the studio of her boyfriend Murat Dalkılıç, Hande and Murat received a real opportunity to show themselves not only in Turkey, but also abroad. Moreover, this year the new Iranian-Turkish film “Intoxicated with Love” / Mest-i Aşk, in which the young actress played the role of the stepdaughter of the famous poet Mevlana, will be released.

When will Hande Erçel return to the Turkish series? Will she work on free television or on a paid digital platform? Who will become her new co-star? We will find out about all this very soon.