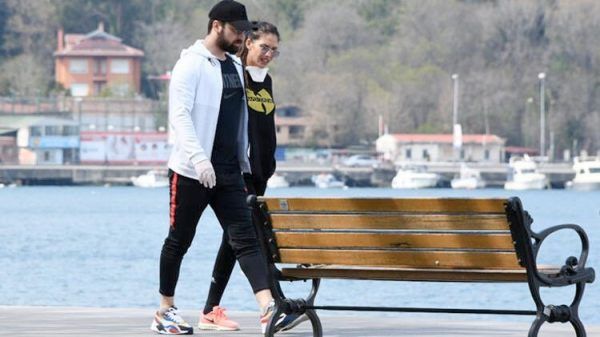 After filming the series Simurg / Zümrüdü anka in Cappadocia was interrupted because of the coronavirus, the star of the show Alp Navruz returned to Istanbul, where he stays in quarantine like any other Turkish citizen. However, as it turned out, not alone, but in the company of a pretty girl.

Alp Navruz, who has long been credited with a romantic relationship with Aslışah Alkoçlar, was seen in the company of a young girl when a couple peacefully walked along the Kireçburnu embankment. Noticing the reporters, Alp warned the girl to move away, but despite the measures taken and a face mask, the paparazzi still managed to take a few pictures of the couple. Soon they got into the car and drove away.

According to some sources, Alp not only dates, but also lives with a new girlfriend in the same house. Some are also sure that the actor’s new sweetheart is Devrim Ozkan, the star of the recently finished series  Reunion / Vuslat, but so far the journalists have not found evidence of this.

Who is the new girlfriend of Alp Navruz? How serious is their relationship? Will their romance grow into something more? We will learn about all this in the near future.