When will the Kıvanç Tatlıtuğ series be released? 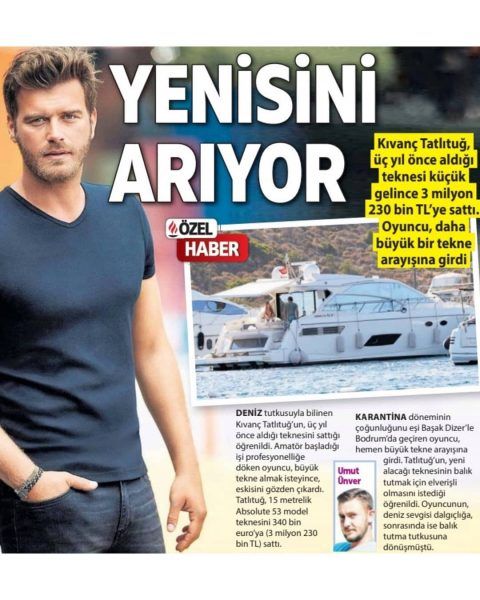 When will the shooting of the Kıvanç Tatlıtuğ series start? When will the series be available on Netflix? Who will perform the underwater stunts on the project? We have become aware of some details of the new work of the star!

Fans of Kıvanç Tatlıtuğ continue to look forward to when their favorite actor will start working on the new Netflix project “The Story of a Submarine”. As it became known, filming of the series will begin after the New Year, and it would be released on the digital platform next September, unless changes were made at the last minute.

Recall that the superstar of Turkish cinema plays a marine biologist who has to save the world. It seems that the theme of the sea did not arise by chance. Everyone knows Kıvanç’s passion for the sea, diving and fishing. And this passion is not cheap for him. For example, this week Milliyet reported that Kıvanç Tatlıtuğ sold his 15-meter Absolute 53 yacht, which was purchased three years ago for 340,000 euros. The actor prefers to quarantine in Bodrum with his wife Başak Dizer and apparently the previous yacht did not suit him.

Kıvanç began searching for a new large yacht, on which he is going to practice his favorite hobbies – diving and fishing. Curiously, his best friend Çağatay Ulusoy ordered a new yacht at the shipyards of Marmaris. I wonder if Kıvanç will find a ready-made yacht or, following the example of Çağatay, will make an individual order?

One thing is certain – all the underwater stunts in the new series Kıvanç Tatlıtuğ as an experienced diver will perform himself. All we have to do is wait for the next project of our favorite star.