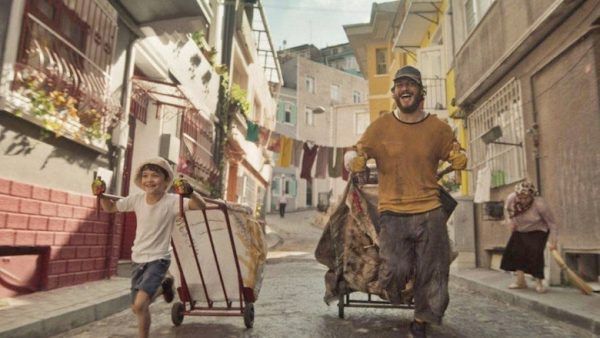 As it turned out, there are also journalists in Turkey who write not about the actors’ noses, subscriptions on Instagram, private lives, or about the fact that the actor bought another house, but about films. Since such journalists are very rare in Turkish press, we decided to talk about such a rare case.

Sabah journalist Hincal Uluç reports that he has watched the film Paper Lives / Kağıttan Hayatlar. And he didn’t do it just to “kill time”. He watched the FILM with a capital letter. Associations with Turkish classics and foreign ones immediately came to his mind, he remembered Mark Twain with his famous novel “The Prince and the Pauper”.

Unlike his colleagues, the journalist praised Ercan Mehmet Erdem’s script. Director Can Ulkay filmed the story beautifully. Çağatay Ulusoy acted phenomenally. Emir Ali Dogrul as a boy who fell victim to a cruel stepfather was amazing. You will not believe how the story develops and how it ends. When the message “End” appeared on the screen, he could not take his eyes off the screen and exit Netflix. The journalist strongly recommends the movie for viewing to everyone who really loves good cinema.

By the way, he read the news that Umut Evirgen allegedly complained that his story was stolen. The journalist has never heard of his film at all, he only knows that the film is about paper collectors as well. And this surprised him greatly: there are millions of garbage collectors in the world, millions of stories about such people, how can this be stolen? Then all films about doctors and hospitals are stolen from the one who made the first film. Not to mention the films about the Second World War.

It’s a shame to assert such things. Should decent journalists write such articles, and decent magazines should print them? Moreover, with headlines like “Didn’t Çağatay steal the script?” (by the way, the script was not written by Çağatay). The journalist encourages his colleague to write a story in which there will be other paper collectors, different from those who usually walk the streets, other warehouses, etc. Let’s see if he succeeds. And yes, Mr. Hincal asks not to accuse him of stealing this article from Orkun Un. He didn’t steal. He criticized!