Murat Akdoğan and Hande Erçel: was there love? 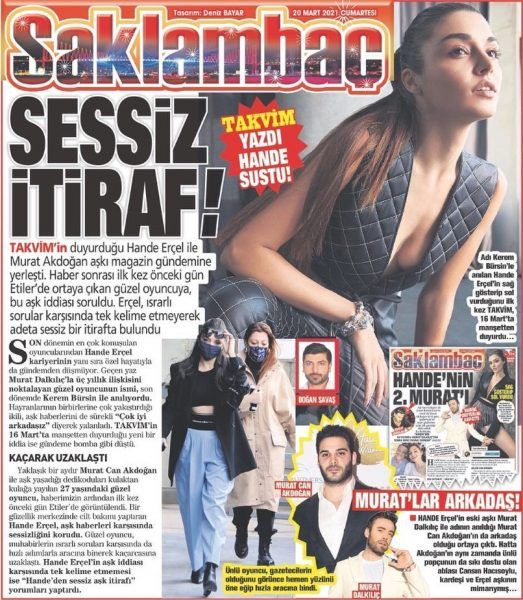 Murat Akdoğan and Hande Erçel: was there love?

In the last week, the Turkish press has been overwhelmed with the story of the new love affair of Hande Erçel and wealthy businessman Murat Akdoğan. But it’s not as simple as it looks. As the saying goes “cherchez la femme”?

These are difficult times for Turkish journalists. Professional criticism of films and TV series has never been their strong point, and journalism has generally been limited to gossip about the personal lives of stars. And they willingly played along with the press, appearing in clubs and commenting on rumors about their life.

However, due to the pandemic, social life came to a standstill, and journalists had to switch to finding out who follows whom on Instagram. Now, it’s from that source that the press gets their love stories.  And paparazzi don’t care about the truthfulness of their information.

So, on the basis of a mutual subscription of the heir of a wealthy family, Murat Akdoğan and Hande Erçel on Instagram, they concluded that there was a love affair between two young people and even began to annoy the actress with questions about her new boyfriend, which she chose to ignore. The paparazzi then discovered that Murat Akdoğan was acquainted with the former sweetheart of Hande Murat Dalkılıç and wondered if one Murat had taken the girl away from the other Murat.

Interestingly, it’s said that all the news about the affair came from one source, a blogger who is very close to another actress who considers Hande to be her rival for both personal and professional reasons. It seems that nasty rumors should have destroyed Hande’s reputation.

However, it seems that the powerful Akdoğan family did not like all these press games. A sharp shout-out followed, and the affair invented in the press immediately stopped. In order not to lose face, journalists claimed that love did exist, but Murat’s father forced the young man to abandon the girl. By the way, Hande and Murat didn’t react to all the crazy press dancing around them and continue to follow each other.

Alas, Turkish tabloids are able to tarnish the reputation of a young girl, attributing many love affairs to her, just because they need to write something. And what about love? Or maybe there was no love at all?