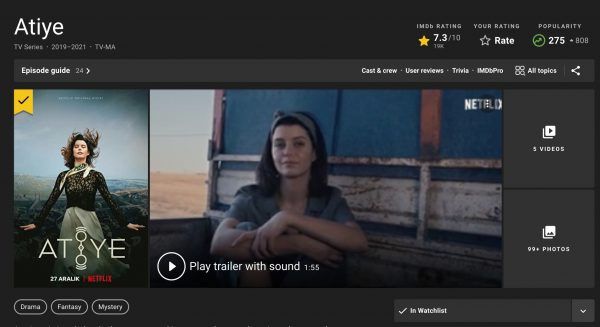 This week, the position of Turkish digital projects in the international movie database IMDB was determined by the release of the last season of the series Atiye / The Gift, which is on the 275th position among all TV shows in the world. The Gift is so far only the second Turkish project after The Protector, which has three seasons, so the comparison with The Protector is inevitable. Recall that after the release of the 4th season, the first Turkish project was on the 111th position, and the next week it climbed to 94th position. Next week we will find out whether The Gift can surpass its predecessor.

The Protector is doing pretty well this week, remaining the second most wanted Turkish series on the platform in the world. The position of the series Love 101 has grown a little. It seems that the audience is interested in when the next season will be. The series Yesilçam, despite the fact that it is only available to users of the Turkish platform Blu TV, continues to attract interest from international viewers.