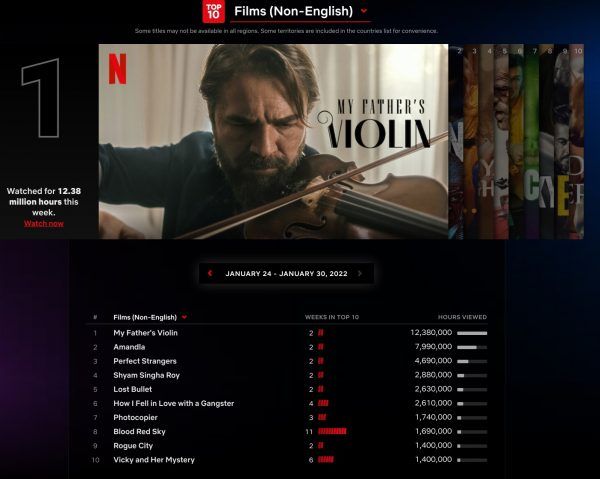 After a string of bad movies that failed one after another, Turkish film producers finally released a real hit that won the hearts of millions of viewers on Netflix. Alas, Turkish journalists simply did not notice this.

A simple and somewhere even naive film about how an uncle took care of an orphaned niece who shared his passion for music was not much promoted on Netflix, apparently considering that such a story could hardly interest the viewer. However, they were wrong again. As in the case of the previous hit film “Paper Lives”, it was the simple and touching relationship between an adult and a child that managed to win the hearts of both Turkish and international viewers.

According to official Netflix data, “My Father’s Violin” starring Engin Altan Düzyatan and Belçim Bilgin topped the list of the most watched non-English films on Netflix worldwide. The film ranks 4th among all Netflix films and 5th in number of tops by country, reaching the top 10 even in the United States. Thus, the film was even more successful than “The Miracle in cell N7”, second only to the platform’s previous hit, “Paper Lives”.

However, the Turkish media simply did not notice the undoubted global success of the Turkish film. The press released a couple of articles before the start of the movie, which were paid for by Netflix, and on this they considered their task completed. Alas, the successes of compatriots in the world are of much less interest to Turkish journalists than the affairs of the stars of summer romantic comedies. One can only hope that the outrage on social networks over the stunning lack of professionalism will make the Turkish press come to their senses and still catch up by giving information to their readers.