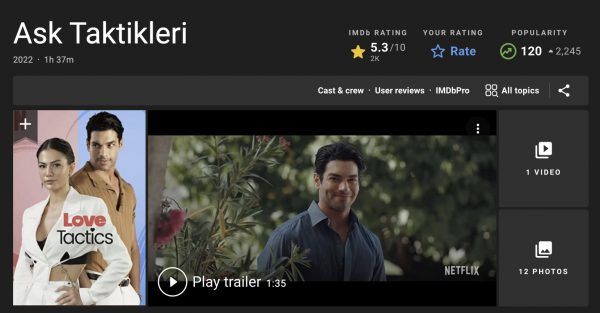 This week, the position of Turkish digital projects in the international movie database IMDB was determined by the release of the new Turkish film “Love Tactics”,  which in the second week of the screening rose by 2.245 points and ranked 120th among all films presented in the world database. This is slightly worse than Paper Lives, that ranked 43rd, but better than My Father’s Violin, that ranked 145th.

Among the TV shows, there were no major surprises. The Netflix series The Protector is back in the top spot, showing a solid record for three years in a row and will likely stay there until the release of the new Netflix project Midnight at the Pera Palace, that will debut on March 3rd. The series The Club continues to slowly lose ground and without a new season, it is quite possible that in six months it will leave the list of 5 thousand most wanted TV shows in the world according to IMDB. The docudrama Rise of Empires: Ottoman holds up well. Given that the new season is approaching, this project will show itself.