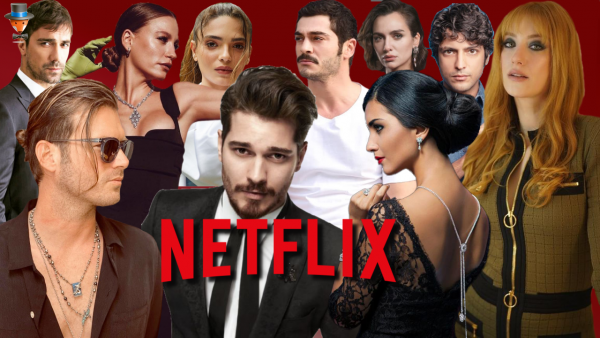 2022 can be called a turning point in the Turkish film industry. From now on, the most anticipated Turkish series are released not on television, but on digital platforms. What new Turkish Netflix series are of the greatest interest to Turkish and global viewers?

Let’s start with good news for fans of already released Netflix series produced in Turkey. Most of them were quite successful and received the approval of the platform management for the next season. The second season of the series “Yakamoz S-245” starring Kıvanç Tatlıtuğ will be filmed together with Belgian filmmakers, as it is the official spin-off of the Belgian Netflix series “Into the night”. In the new season, we will see the duet of Mehmet Kurtuluş, who played one of the main characters of the series “Into the Night” and Kıvanç Tatlıtuğ.

Preparations are underway for the filming of the second season of the series “Midnight at the Pera Palace / Pera Palas’ta Gece Yarısı” starring Hazal Kaya and Selahattin Paşalı. Given the great success of the series on the platform, Netflix has significantly increased the budget of the project. We are waiting for new locations and new special effects. Filming is scheduled to begin in the summer.

The shooting of the second season of the series Fatma, which has aroused considerable interest in the world, will also start in the summer.

Despite the lack of international recognition of the series “The Club / Kulüp“, the success in Turkey was enough that the project was also renewed for a second season. This summer, Barış Aduç will not go on vacation, he will work in the Netflix series. And another star of “The Club” Salih Bademci will work in two Netflix shows at once, circling between the film sets of the series “The Club” and “The Tailor”.

The series “Erşan Kuneri“. Starring Cem Yilmaz, Ezgi Mola, Uraz Kaygılaroğlu and Nilperi Şahinkaya. Whether the typical Turkish comedy will receive worldwide recognition is not yet entirely clear, but the fact that Turkish viewers will be delighted with the opportunity to meet their favorite actors again is certain. The premiere of Cem Yilmaz’s new comedy will take place on May 13.

The series “Flight of the Bird / Kuş Uçuşu” produced by Ay Yapim. Starring Birce Akalay, İbrahim Çelikkol and Miray Daner. The plot of the show is devoted to the conflict of generations. Social dramas are quite a complex genre that can either be very successful or fail. We will find out what fate awaits the project of Turkish filmmakers at the beginning of summer, when Netflix will present the new show to its subscribers.

The series “Hot skull / Sıcak Kafa” produced by TIMS&B. Starring Osman Sonat, Gonca Vuslateri and Hazal Subasi. So far, all attempts by Turkish filmmakers to create something significant in the dystopian genre have not been particularly successful. Let’s see if they can adapt Afsin Kum’s famous science fiction novel about an epidemic of madness. Only a modest linguist (Osman Sonat) will be able to stop the global disaster. However, he is being hunted by the special services, which have their own goals.

The series “From whom we ran away, mother / Biz Kimden Kaçıyorduk Anne“. Starring Melisa Sözen, Birand Tunca, Deniz Karaoglu, and Musa Uzunlar. The script is based on the novel of the same name by Perihan Magden, which tells the story of a mother who tries to run away from everything that could harm her daughter, including crimes committed in the name of supposed safety. Filming of the 8-episode series by 1441 Productions took place in Cappadocia.

The series “Şahmeran” produced by TIMS&B. Starring Serenay Sarikaya and Burak Deniz. According to preliminary information, the series will be released this fall, and in the summer the team will start filming the second season. It seems that the platform is confident that the story of a snake woman who is studying at a university while hiding her true identity will appeal to users of the platform. Besides, fantasy projects are always of great interest to Netflix subscribers.

The series “Created / Yaratılan” starring Taner Olmez, Erkan Kolçak Köstendil and Şifanur Gül. For the first time in his career, Çağan Irmak is both a project director and a screenwriter. So far, we know almost nothing about the plot, but the strong cast and the name of the famous director make us wait with particular interest for the release of the show on the platform.

The series “Another Self“. Starring Tuba Büyüküstün, Murat Boz, Boncuk Yılmaz, Rıza Kocaoğlu and Seda Bakan. This is the story of three school friends who support each other when one of them named Sevgi gets sick. The classic drama, in which Turkish cinema is so strong, will probably be in great demand by the audience. The Netflix management is sure of this, and the shooting of the second season will start in the summer, without waiting for the release of the first one.

The series “The Cemetery / Mezarlik“. Starring: Birce Akalay and Olgun Toker. The plot focuses on the investigation of murders by a special unit that deals with crimes against women. In each episode, a new crime will be investigated. Filming is over, and we expect the miniseries to hit screens this summer.

The series “The Tailor / Terzi“. Starring: Çağatay Ulusoy, Şifanur Gül, Salih Bademci and Olgun Şimşek. One of the most anticipated projects of this year, the right for which was contested by Disney Plus and Netflix. In the end, Netflix bought the rights for three seasons at once, which are filmed as a single block.  Çağatay plays the tailor Peyami, who is in a very difficult life and has a mentally ill father. Peyami falls in love with a girl named Esvet, for whom he sews a wedding dress. As you know, the Turks are the best in psychological dramas and love stories, so it is quite possible that Netflix’s high hopes for this project are fully justified.

The series “Otello Kamil” by screenwriter Levent Cantek, who gained particular fame after the success of his digital series “Steppe” and “Yeşilçam”. It is thanks to the Yesilçam series, which topped the rating of the Blu TV digital platform last year, that the Netflix management commissioned a similar project from the production company Sunset Film and Levent Cantek. Of course, Netflix would like to get its most successful star, Çağatay Ulusoy, for the main role. It is reported that Çağatay is very warm to the proposal, for him this is a chance to show his acting skills in the most difficult dramatic role at the international level.  The series will take place in 1924-34. The story is dedicated to the first Turkish theatrical actor. There will be everything: theatre, actors, bandits, Istanbul, Ankara, politics, betrayal.

As we can see, international digital platforms are rapidly expanding the production of series in Turkey, investing funds that simply “kill” television production, draining both stars and all available resources. From now on, we will have to do reviews and monitor the ratings not only on television, but also on platforms, the largest of which is still Netflix.