Çağatay Ulusoy proved to be a loyal son 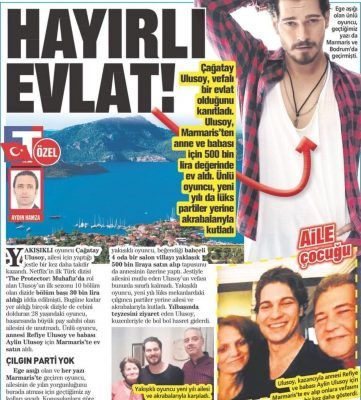 Çağatay Ulusoy is a loyal son

According to Takvim magazine Çağatay Ulusoy, he turned out to be a loyal son who preferred to celebrate New Year with his family rather than celebrate with his friends at a luxury party, like many other stars. Also, the actor bought a house for his mother Refiye Ulusoy and his father Aylin Ulusoy in Marmaris with 4 rooms and a garden for 500 thousand Turkish liras. They say that the parents really liked the house and the son made them a gift for the holiday. On the eve of the New Year, Çağatay visited his aunt and cousins, and the New Year was celebrated with his parents.

Note that celebrating the New Year with the family for Çağatay has long been a tradition. His beloved Duygu Sarışın also spent time with her parents. Most likely, after the holidays are over, the actor will go to the USA, where his agent Engin Aykanat is already located.