The crisis of the Turkish TV or Save us, Netflix!

Famous journalist Sina Koloğlu gave some information on new Netflix projects that are currently in the works.

Series of Beren Saat will be prepared by the company O3 Medya, which is also working on the TV series “The Protector”. It will include historical and fantastic elements. The author of the script is Nuran Evren Şit, who wrote scripts for such TV shows as Elveda Rumeli, Intikam, Şeref Meselesi, and Vatanim Sensin. The shooting will take place in Göbeklitepe (Potbelly Hill) – the temple complex, considered one of the largest megalithic structures in the world. The journalist wonders how much the flow of tourists to this place will increase if the series is successful.

In addition, another Netflix series is coming up – the Ottoman Raising that makes Karga Seven Pictures. Shooting of the project will begin in March and it will be aired in September. Dokudrama will describe not only the life of Sultan Mehmed the Conqueror, but also his legacy. 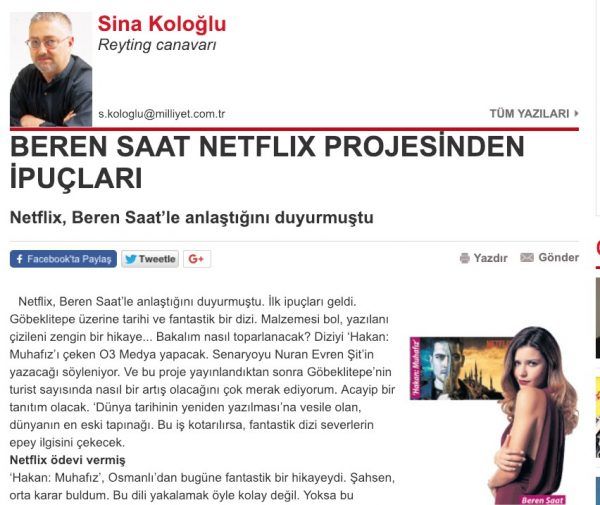 However, the main thing in the journalist’s article is not Netflix’s next projects, but the general situation on the TV series market, which is in deep crisis. TV channels cannot hold projects that are closed one by one. Only state financing of the TRT channel saves the situation. The largest producers of serials, as well as the most famous actors, lined up on the threshold of the Internet platform under the common slogan “Save us, Netflix!”