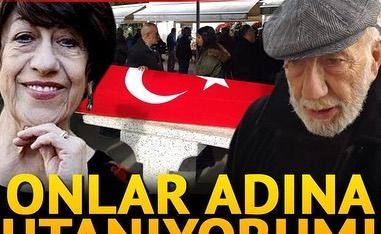 Today at the funeral of the favorite Turkish actress Ayşen Gruda, an extremely unpleasant incident occurred. One of the fans wanted to take a photo with Demet Evgar, who was present at the funeral. However, the actress refused, saying that the funeral is not the place where it is appropriate to take such photos or give autographs. In response, another fan began to shout that Demet had become a star, letting herself be photographed by the reporters (as if they were asking permission for a photo), but it’s shameful to take photographs with normal people. The men who were present at the funeral intervened and took the rowdy away.

It is curious that the ex-husband of Mrs. Ayşen gave an interview to Turkish television, in which he criticized the stars who left the photo with his former wife in social networks but did not bother to attend the funeral. However, as we see, the stars were presentat the funeral, those who could take time off from the shooting, so the words of the spouse look like a desire to promote himself.