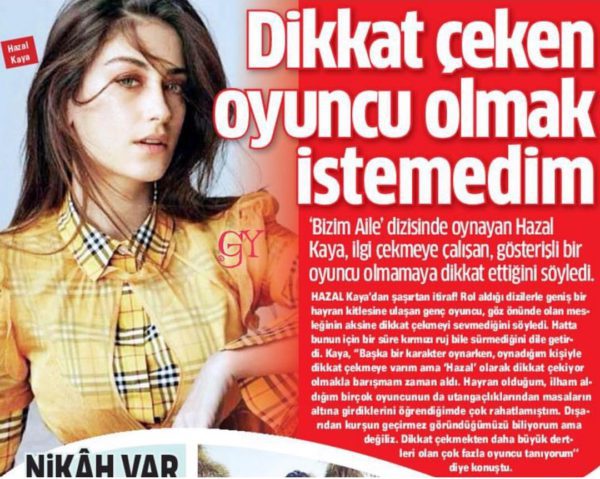 One of the brightest stars of Turkish show business, Hazal Kaya, who recently married her sweetheart actor Ali Atay, made an unexpected confession. Hazal, who gained world fame with such serials as Forbidden Love and I called her Feriha, said she did not like to attract attention to herself, which is a constant attribute of her profession.

“I haven’t even used red lipstick in everyday life for a long time,” the actress said. “When my character in the series attracts the attention of the audience, there’s no problem. But it’s difficult for me to be “Hazal Kaya”. It took some time to accept this part of the profession. To an outsider, it probably looks like the actors are used to it, but it’s far from it. I know a lot of my colleagues who are experiencing much more serious problems of this kind. ”

We remind you that the latest Hazal Kaya’s series “Our Story” / Bizim Hikaye became a hit on Turkish television, and once again confirmed her status as one of the brightest stars of the screen. In May, the series, which is successfully sold abroad, will be finished. Nothing is yet known about the future plans of the star, but the Turkish press claims that she is going to go to the USA to continue acting education and a career. There are persistent rumors that Hazal will participate in the series or the film of Netflix’s online platform, just as her colleagues in the acting agency of Engin Aykanat Çağatay Ulusoy and Engin Ozturk did.