The first photos of Karan Özçivit 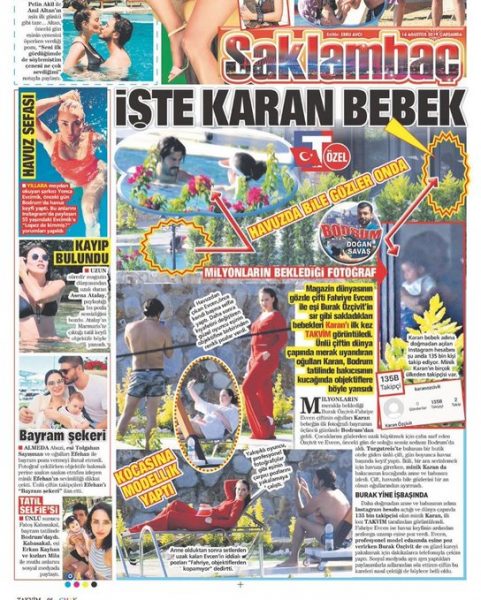 The first photos of Karan Özçivit

They are the most popular star couple in Turkish show business. Their son became a star even before birth. Finally, we saw Burak Özçivit and Fahriye Evcen son Karan Özçivit.

Turkish paparazzi for a long time hunted for a photo of the firstborn of Burak Özçivit and Fahriye Evcen the baby Karan. We remind you that big Arab companies offered huge money for advertising featuring the baby but the parents were strongly opposed. No one saw Karan’s face. And finally, the journalists spotted the couple on vacation in Bodrum where they arrived with their son.

The reporters of one of the Turkish newspapers photographed a young couple in the hotel where they stayed. While Burak and Fahriye rested by the pool their baby, who was in the arms of the nanny, watched them through the window. Of course, the pictures are not clear but the silhouette of Karan can be seen.

While Fahriye was happy to pose for her husband, lying on a deck chair, Burak took photos of her on the phone. Note that the actor graduated from the University of Marmara with a degree in fine art and photography, he is a professional photographer, and he takes great pleasure in photographing his wife.

True, there was a little fly in the ointment. Many users of social networks noticed that Fahriye gained weight after giving birth and due to feeding her baby and this is quite normal, she will quickly get in shape. But the form of her husband leaves much to be desired. Despite daily training, Burak does not look athletic. However, it’s enough to recall that Engin Altan Düzyatan also did not have athletic figure despite the fact that for five years he intensively swung his sword on the TV series “Resurrection Ertugrul”. It seems that Burak does not want to turn himself into a “jock” preferring to look on the screen as naturally as possible.