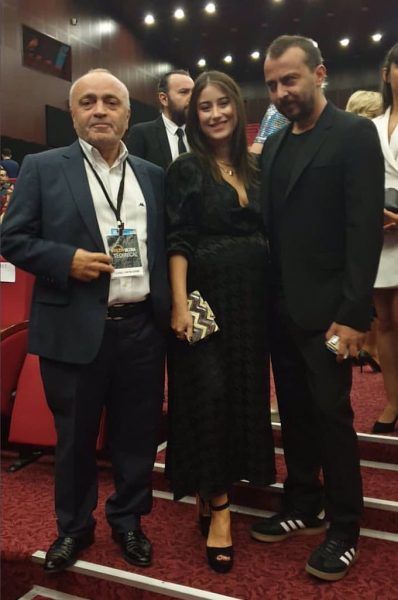 She is a superstar of the Turkish screen, and she is not going to stay at home waiting for the baby. Hazal Kaya made a splash during her last public appearance.

On September 28, the closing ceremony of the Golden Cocoon film festival in Adana was held, in which the team of the movie Noah Land / Nuh Tepesi took part. The film received awards in the categories of “Best Film”, “Best Cameraman” and “Best Director”. The movie director thanked the whole team and noted in his speech that although the wife of the leading actor Ali Atay Hazal Kaya did not appear in the movie, she helped a lot, for which he expressed special thanks to her. Recall that earlier Ali Atay received an award for this film as the best actor at the New York Film Festival. The film was selected in the competition program at 12 festivals.

Hazal Kaya, who is eight months pregnant, decided not to stay at home, but to support her husband at an official event. The star was in excellent physical shape and did not refuse fans a few photos. Users of social networks noted that the actress was especially beautiful and wished her to quickly take the baby in her arms. As Hazal has stated more than once, she intends to continue her career in cinema and does not believe that future motherhood will prevent her from doing this. Her husband encourages the actress in her decision, promising full support and understanding. Turkish viewers note that the Kaya-Atay couple has become the same role model as the spouses Bergüzar Korel and Halit Ergenç, who are expecting the birth of a second child.

READ  Çağatay Ulusoy and Hazal Kaya in the new film for Netflix?