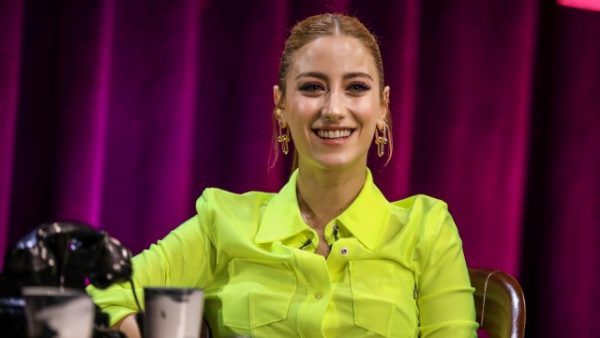 Despite the fact that the pandemic confused the plans of Hazal Kaya and Çağatay Ulusoy, work on projects in Hollywood did not stop. This was confirmed by the actress in her last interview.

In July 2018, the Turkish media gave the news that Çağatay Ulusoy and Hazal Kaya had signed a contract with the American acting agency UTA. It has been alleged that the actors had offers from Hollywood companies and were supposed to star in US production projects. Some time later, a pandemic began and work stopped. However, as it turned out, not forever.

Hazal Kaya, who was the guest star of the popular Ibrahim Selim talk show on YouTube, confirmed that she was preparing to work overseas, but the pandemic put everything on hold for a while. Now that the situation is gradually returning to normal, and projects are being unfrozen, work begins again.

Her biggest dream is to work in Hollywood, for this she has been hard at work improving her English. And since she and Çağatay have signed a contract with an agency that considers them successful and follows their careers, why not give it a try. Better to try it now than regret not even taking the risk. Yes, in the near future she will have surprises for her fans, and she is going to work abroad.

Recall that today the UTA agency represents the interests of such stars as Johnny Depp, Angelina Jolie and many others. Prior to the outbreak of the pandemic, the agency arranged a series of meetings for Hazal and Çağatay with Hollywood producers. Apparently the negotiations were successful. Note that the agent of Turkish stars Engin Aykanat runs between New York, Los Angeles and Paris every month. Apparently his travels are connected to the work of his clients.

Hazal also talked a little about her first series on Netflix, Midnight at the Pera Palace. According to the star, the project will have a fantastic time-travel experience, but everything else will be real, there will be no more fantasy elements. They reproduced the historical era very accurately. Her character will have to save Mustafa Kemal Ataturk, although the era is completely unfamiliar for her. It seems the fantasy element was introduced to attract Netflix’s youth audience, which is unlikely to be interested in just a historical project. And this is a very smart move.

Fans of the Turkish star are eagerly awaiting her Netflix series, which could define Hazal’s entire career. If the project succeeds, and with a contract with the important Hollywood agency, she may receive other lucrative offers from the United States.