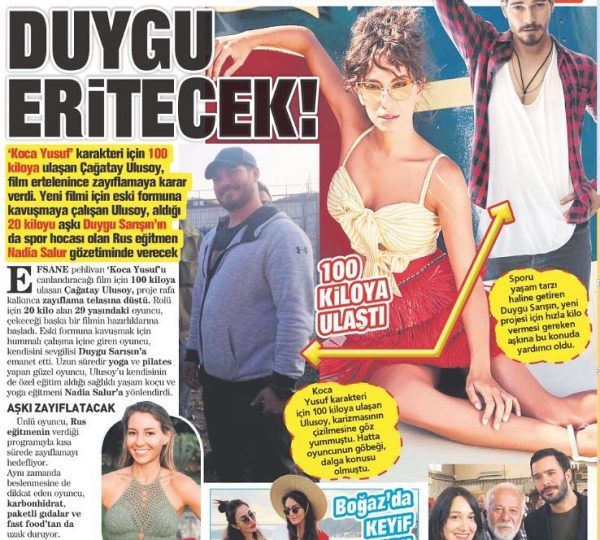 The Turkish press is still desperately trying to find out what is happening with Çağatay Ulusoy, what project he is preparing for and why he has gained weight. Confidently confusing his own film and the film about Koca Yusuf, the tabloid Takvim announces that the film about the famous wrestler has been postponed, but the actor is preparing to shoot a new film, so he urgently needs to lose weight gained for the role of Yusuf. For this reason he began to work with a Russian fitness instructor Nadia Salur, who also practices with his girl-friend Duygu Sarışın. Çağatay also put on a diet, he does not consume carbohydrates and fast food.

In general, nothing really new. Nobody knows for what project Çağatay is preparing, therefore they rely on rumors as usual. Note that Çağatay has a sports instructor for a long time, but she is not Russian and her name is not Nadia. According to celebrity photographer and blogger Tokyo, who recently met with Çağatay, he really put on some weight for the new role, but just a couple of kilograms and a photo that the Turkish press discussed for weeks is just an ordinary Photoshop.