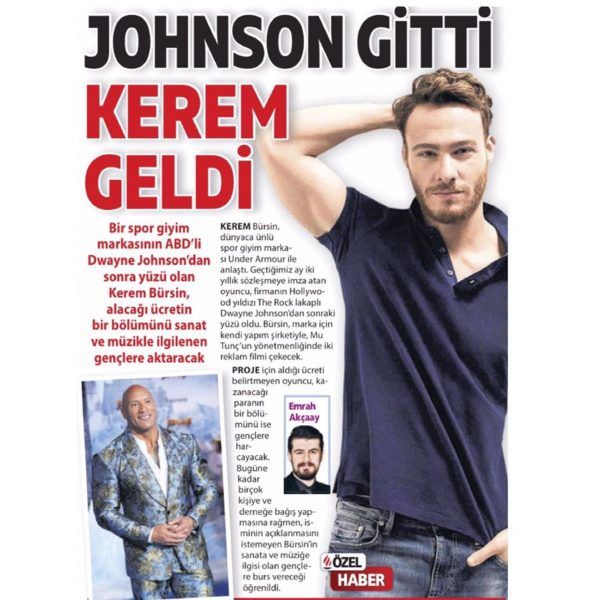 Kerem Bürsin continues a successful career outside Turkey. It has been reported that the actor signed an agreement with the world’s largest brand for two years.

Kerem Bürsin reached an agreement with the world-famous sportswear brand Under Armor. As it became known, last month the actor signed a two-year advertising contract, becoming the face of the brand after Dwayne Johnson. Kerem will not only act as the face of the brand, but will also produce commercials directed by Mu Tunç. Kerem will donate a portion of his undisclosed fee to a fund to help young people who are engaged in the arts and music.

We remind you that a year ago, the Turkish press reported that the ex-girlfriend of Kerem Bürsin Serenay Sarikaya was about to sign a contract with the Prada brand, becoming its face instead of Gigi Hadid. However, this never happened, it turned out to be a waste of publicity. Ironically, her “ex” Kerem Bürsin really signed an international contract and will become the face of a famous brand instead of an American superstar. As the French say in such cases, “c’est la vie”.

When will the work on the new advertising company begin? Because of the situation in the world, filming of the commercials has been delayed for the summer, but sooner or later everything will return to normal and life will continue.