The shocking accusations against Neslihan Atagül 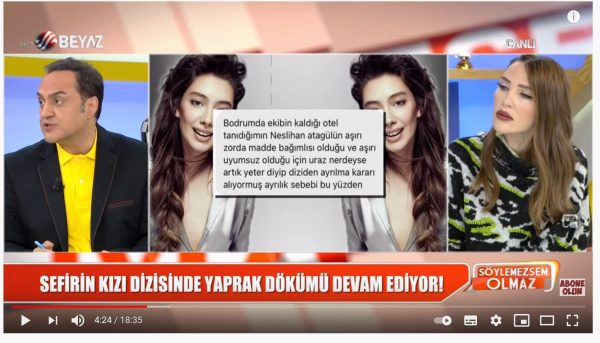 The shocking accusations against Neslihan Atagül

The shocking accusations against Neslihan Atagül were made on the Söylemezsem Olmaz program. The presenters of the program read messages that were sent to them with information about the real reason for Neslihan Atagül’s departure from the series Ambassador’s Daughter / Sefirin Kızı.

According to the presenters, the actress used illegal drugs, which put the entire film crew at risk. The producers endured what was happening for a long time, but the situation only worsened and therefore it was decided to dismiss the actress from the series, finding a suitable replacement for her.

Uraz Kaygılaroğlu is also associated with these events, however, it is not entirely clear whether the actor left because he was tired of this situation or, on the contrary, took drugs with Neslihan. The charges are very heavy, and they’re in two episodes of the program. Let’s see if the actors go to court to defend their integrity.