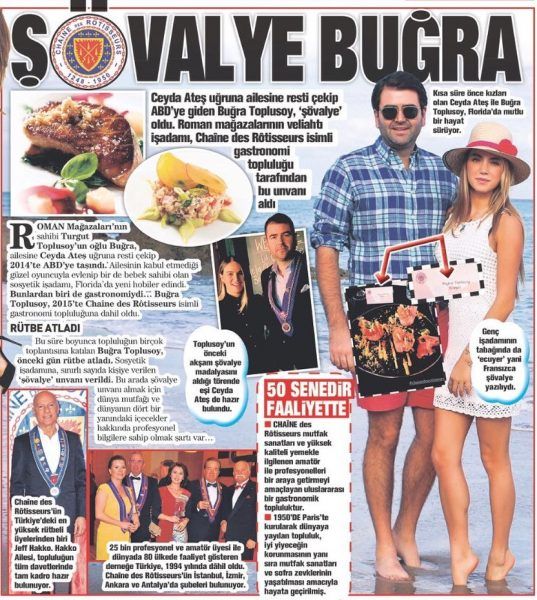 The heir to one of the richest families in Turkey, Buğra Toplusoy, broke up with his family, who refused to accept his chosen one, actress Ceyda Ateş, and left with his beloved in the United States. The young couple got married and recently had a daughter, Talya. Buğra proved to his father that he can be successful without family capital by opening his own business in the United States.

He also has a hobby: since 2015 he is a member of the international gastronomic community Chaîne des Rôtisseurs, which has existed since 1950. The community is dedicated to supporting the culinary arts around the world, it operates in 80 countries and includes 25 thousand professionals. Turkey was included in the ranks of the community in 1994. Chaîne des Rôtisseurs has branches in Istanbul, Izmir, Ankara and Antalya.

Thanks to his work in the Chaîne des Rôtisseurs community, Buğra received the title of knight (chevalier). His wife Ceyda Ateş also attended the knightly medal ceremony. From now on, he can call himself an ecuyer (knight). To be awarded a knightly title, you must have professional knowledge of world cuisine and drinks from around the world.

P.S. The Buğra’s family eventually adopted a daughter-in-law. As we can see, Cinderella stories do not only happen in Turkish TV series.