Neslihan Atagül on the cover of an American magazine 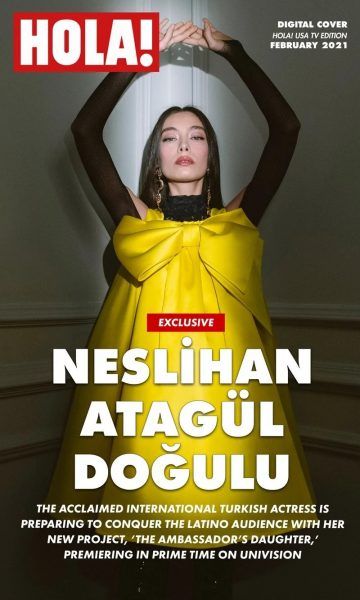 Neslihan Atagül has successfully overcome the problems that forced her to leave the series “The Ambassador’s Daughter” / Sefirin Kızı and is preparing to take the first step into the international market. The actress appeared on the cover of a prestigious American magazine.

Neslihan Atagül, who completed her work in the TV series “The Ambassador’s Daughter” due to health problems, has taken another step towards conquering the foreign market by appearing in the largest Spanish-language US publication HOLA! Note that this is the first Turkish actress to be featured on the cover of a prestigious American magazine.

The interview of the Turkish star is timed to coincide with the premiere of her new series on the Spanish-language TV channel Univision, where the Eternal Love series starring Neslihan Atagül and Burak Özçivit was previously successfully broadcast. The new Turkish TV show will premiere on March 2.

As the actress admitted, she is very excited about the upcoming US premiere. Playing the character of Nare, she lived the story of this woman with every cell of her body. The audience will watch the story of a woman, a love story, a story of a mother and daughter relationship.

Of course, users of social networks immediately remembered that Neslihan had signed a contract to star in an international project on one of the digital platforms. This is also hinted at by the fact that the actress is now learning English intensively, apparently preparing for the role.