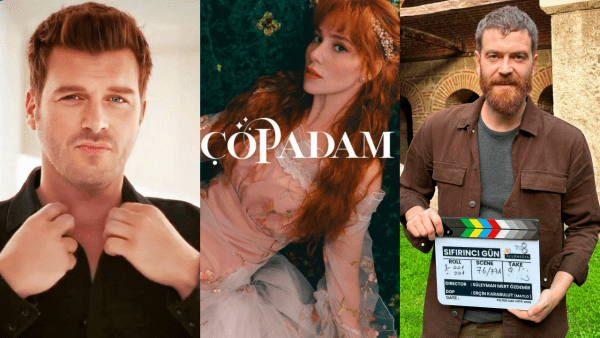 After a significant drop in the ratings at the beginning of the year, Turkish series are once again to attract viewers to television screens. There are some more exciting stories that fans of Turkish TV shows are looking forward to.

“Croupier / Çöp Adam“. Produced by OGM Pictures. Starring Engin Altan Düzyatan and Elçin Sangu. The scriptwriters are Melek Gençoğlu and Su Ersöz. Directed by Yağız Alp Akaydın. The story begins from the moment when Tamer Yılmaz makes a huge fortune and moves into a mansion. However, his childhood traumas haunt him. In the end, he will kidnap Peri, whose life will turn upside down after meeting Tamer, lock her in the basement, and unexpected and breathtaking events will begin.

“Source of Life / Ab-ı Hayat” Produced by OGM Pictures. Screenplay by Nuran Evren Şit. Directed by Hilal Saral. Starring Birkan Sokullu and Hilal Altınbilek. This is the story of a 100-year-old man who continues to look like he is still 30 years old. The famous actress of the era Yeşilçam Humeyra, was asked to play the role of a character named Neriman.

“Omer“. Produced by OGM Pictures. Starring Selahattin Paşalı. Directed by Cem Karci. Screenplay by Gülizar Irmak. This is an adaptation of the famous Israeli project Shtisel about the life of Orthodox Jews, but instead of Jews there will be practicing Muslims in the Turkish version. Selahattin will play a muezzin named Omer. Producer Onur Guvenatam offered Barış Falay to play the father of the Selahattin’s character, named Reşat.

“Family / Aile“. Produced by Ay Yapim. Starring Kıvanç Tatlıtuğ and Özge Özpirinçci. Written by Hakan Bonomo. Directed by Ahmet Katıksız. Kıvanç will play the owner of the Volta club and the head of a large Aslan family. Özge Özpirinçci will play the role of the psychologist Devin. Initially, the series was developed as an adaptation of the famous American project “The Sopranos”. However, after the copyright holders did not approve the received script, it was decided to change it completely and, based on the already written material, do something radically different.

Which of the presented shows will turn out to be a real hit, and which one will end up on the air at low ratings, is now impossible to predict. Everything will be decided by the Turkish audience, who are waiting for other surprises.