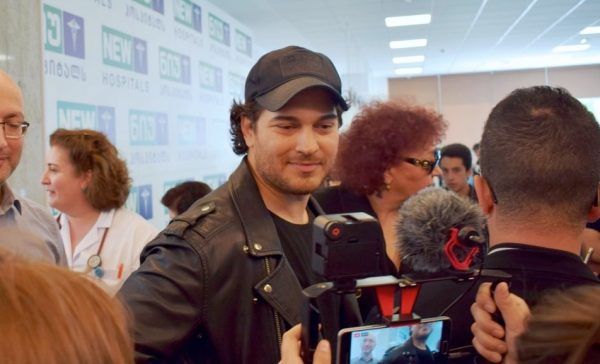 After the huge success in Georgia of the series Insider / Içerde, that was on the top of the ratings in this country throughout the entire broadcast, Çağatay Ulusoy enjoys the well-deserved love of Georgian viewers. The fame of the actor increased even more after the release of the Netflix series Hakan: Muhafiz / The Protector, that was released simultaneously in 190 countries where Netflix is ​​available. Not surprisingly, Georgian fans were eager to see the beloved actor with their own eyes and their dream came true when Çağatay agreed to take part in a charity event organized by the monk Andria Foundation, all funds from which were donated to the Cancer Children Fund.

On Friday, May 10, Çağatay arrived in Georgia and first of all visited the Hematology and Bone Marrow Transplantation Center, where sick children are being rehabilitated. The actor brought a lot of gifts for kids. He also gave an interview to Georgian journalists, which will be aired on Wednesday. In the evening, a charity concert was held, that was attended by a Turkish actor.

On Saturday, May 11, Çağatay was also to meet with the beneficiaries of the Monk Andria Foundation. However, according to some Georgian sources, it was also held on Friday. According to rumors, Çağatay had urgent business in the USA, and he flew out of Georgia at 4:30. Is it true or not, we will know very soon. By the way, the shooting of the third season of the series The Protector will begin as early as next week, so this week has been very busy for Çağatay.

READ  What did Çağatay Ulusoy say about the new scandal with Şeyma Subaşı?