What did Burak Özçivit say about the weight of Fahriye Evcen? 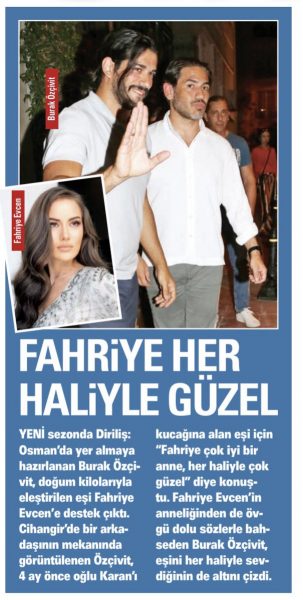 Burak Özçivit about the weight of Fahriye Evcen

The most actively discussed topic on social networks in Turkey (and not only) is the weight of Fahriye Evcen who has significantly gained weight after the birth of her firstborn Karan.

After the journalists spotted the couple Fahriye Evcen and Burak Özçivit on vacation in Bodrum social network users launched a heated discussion about the weight of the newly mummy. Some believe that the actress was letting herself go, and she urgently needs to return to her previous form. Others believe that weight gain for a nursing woman is quite normal and if she cares more about nutrition for the baby than about her own figure then she is a very good mother. In social networks, they even organized a company in support of Fahriye which was held under the slogan “Fahriye Evgen is beautiful in any form.”

The husband of actress Burak Özçivit who was recently seen in a restaurant in the Cihangir district also contributed to the debate. He said that Fahriye is a wonderful mother and in any way she is beautiful for him. Most of Burak’s fans reacted to his words with approval believing that he was doing very wise in everything supporting his wife, who gave him a beautiful baby.