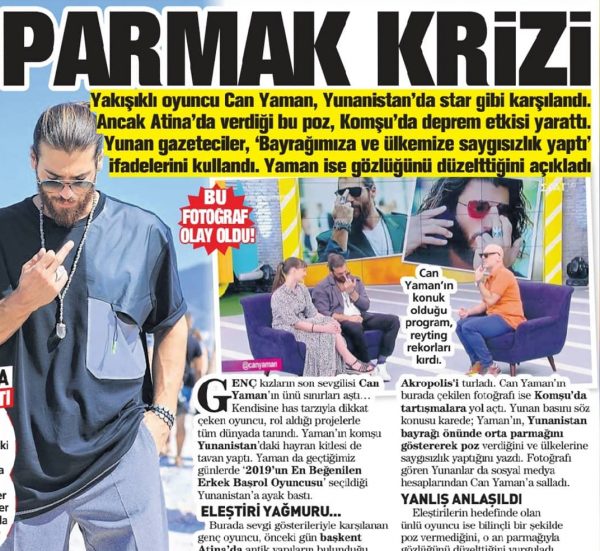 He went on a tour to communicate with fans, but ended up at the center of an international scandal. What happened to Can Yaman in Greece?

The famous Turkish actor Can Yaman arrived in Athens as part of his international tour. The protagonist of the series “Early Bird” warmly talked with fans, and also took part in one of the Greek television programs. However, the visit of the actor almost turned into a complete disaster because of one photo that was taken in the Acropolis. Greek viewers were offended to the roots of their souls when they saw a photograph of Can in front of a historical monument where he gives the middle finger. Moreover, the Greek flag was also in the picture, which caused a wave of indignation in social networks. A flood of criticism fell upon Mr. Yaman. Some even started taking photos in front of the Turkish flag with a similar gesture.

However, as it turned out, the photograph does not reflect the reality and was taken out of context. Actually, Can’s gesture was not offensive. His character in the series “Early Bird” adjusted his glasses with his middle finger and the actor continues to do so. In the next shot that was made by a Greek photographer it is clear that Can was simply adjusting his glasses and nothing more. He did not see that he was being shot, and he could not assume that the Greek flag would be in the photo. A coincidence and nothing more.

In a Greek television talk show the actor himself answered an uncomfortable question: “Those who think that I made an indecent gesture just went crazy!” Alas, the tabloids that take bad photos of celebrities and then make a scandal out of it, make good money not only in Turkey, but also in Greece. It remains only to advise Can to carefully monitor his behavior in public, so as not to fall into the trap of dishonest journalists who are ready for anything for the sensation.