Can Yaman became a cowboy 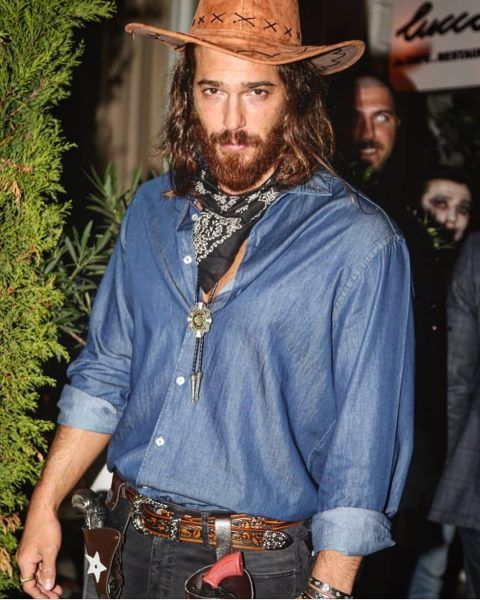 Can Yaman continues to attract the attention of journalists with his extravagant appearance and controversy surrounding his name. What did the actor respond to criticism of Hülya Avşar to his address?

On Thursday, October 31, the Turkish elite cheerfully celebrated Halloween. Note that in Turkey this is just an excuse to dress up funny and fool around with friends. The holiday is celebrated mainly in an artistic world, for ordinary citizens of the country this date does not mean anything. Can Yaman appeared at the party in a cowboy costume and even showed a big toy gun. The actor also admitted that his favorite stars among Hollywood celebrities are Christian Bale, Brad Pitt and Johnny Depp.

Of course, journalists did not fail to ask the actor a question about the recent statements of the famous actress Hülya Avşar about him. Recall that Mrs. Hülya diplomatically but rather harshly spoke about Burak Özçivit and Can Yaman. The actress said that they are certainly handsome, but when they talk about these actors, they only remember their appearance. Here is Kıvanç Tatlıtuğ first an actor who is self-improving, and then a handsome man. Can and Burak will have to go a long way to get closer to Kıvanç.

Can reacted to Hülya Avşar’s statement with great humor, thanking her for calling him handsome. He admitted that he loves and respects Hülya Avşar and everything that she says is true. And jokingly added, “and I’m Kıvanç Tatlıtuğ from The Daydreamer / Erkençi Kus.”

Will Can be able to achieve the same success as his colleague Kıvanç Tatlıtuğ time will tell. We can only wish him success and good luck in the next series.

READ  A criminal case was brought against Can Yaman