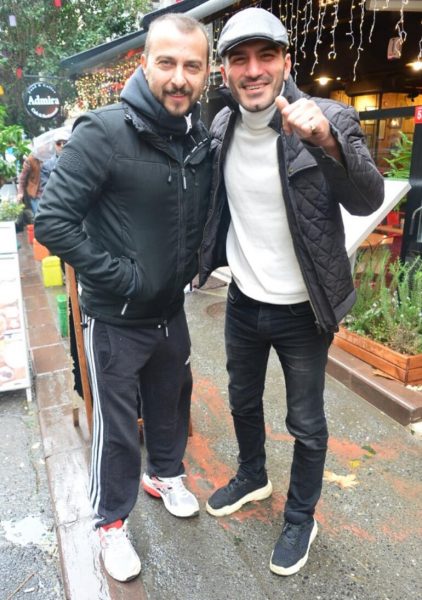 Ali Atay yesterday accidentally met with Ufuk Bayraktar on a street in the Cihangir district. The men hugged and chatted for a long time. Ufuk said that he would certainly visit the couple of young parents and little Fiko, to which Ali replied that he could come whenever he wanted, no need to even ask about it. In a conversation with reporters, Ali admitted that he was very worried about his son’s health, because the children are so sensitive, especially in the first months. He does not let him out of sight for a minute; when he comes from the street, he takes a shower before approaching the child.

Due to a fire in their house Zekeriyaköy they continue to stay in Istanbul with relatives. Repair in the house continues. The actor also talked about the photo of little Fikret Ali, that was posted by his wife Hazal Kaya. As Ali admitted, the decision to publish the photo comes to Hazal spontaneously, her heart wanted it so she published. They guard the little baby and do not want to show him a lot. “When the baby’s gas comes out, you become the happiest person in the world,” admitted the newly made daddy.