Gala premiere of the series Rise of Empires: Ottoman 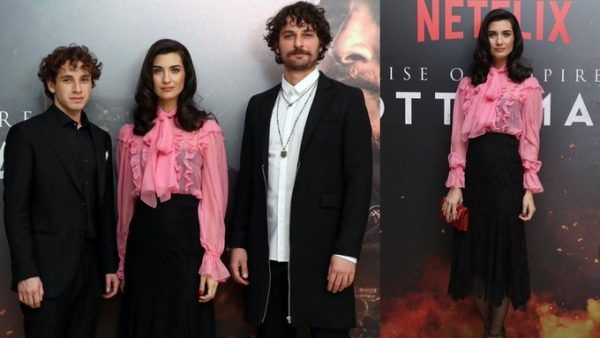 Gala premiere of the series Rise of Empires: Ottoman

What did Tuba Büyüküstün respond to criticism of her new series Rise of Empires: Ottoman ? How was the gala premiere of the series? Why did the star have to endure some unpleasant moments?

This Friday Netflix will present to its viewers a new documentary series, Rise of Empires: Ottoman. On Tuesday, January 21, the gala premiere of the project with the participation of its leading actors took place.

There were rumors during the premier that it would be nice to continue the line of the docudramas, introducing other historical eras in the history of the Ottoman Empire. Whether this is a wish of the Netflix management or a dream of the creators of the series is not clear, however, we recall that the documentary about the Roman Empire already has three seasons. So if the Ottoman is waiting for a warm welcome from an international audience, the show may well be renewed.

The star of the evening was the performer of the role of stepmother of the main character Mara Hatun Tuba Büyüküstün, who gave a short interview to reporters. As she admitted, there was little information about her heroine and for her the character was a revelation. Regarding the criticism of the series she replied that she was calm about such things, the criticism was and will be. They did a great job.

At the end of the interview, Tuba experienced some unpleasant moments. The actress became a victim of arrogant street beggars who openly extorted a small sum of money from her. After they were refused, the beggars climbed into the car in which the star was. The guards had to drag them in front of the journalists.

We look forward to the premiere of the series on Friday, January 24 at Netflix and hope that the show finds its audience.