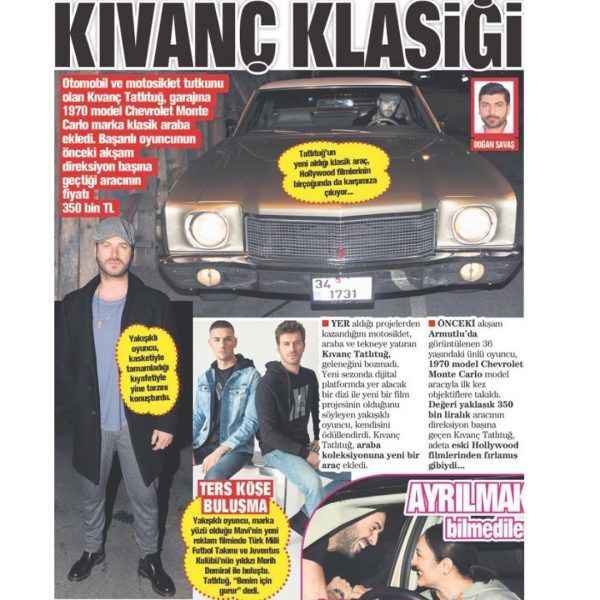 Finally, fans of Kıvanç Tatlıtuğ got some good news. Their favorite star is returning to the series, which will shoot one of the digital platforms. And that’s what the actor reported in person!

In the past few months, there have been persistent rumors in social networks that Kıvanç Tatlıtuğ will work with Netflix and that is why he could not accept the offer to star in the role of Mustafa Kemal Ataturk in the series Independence or Death. And the rumors seem to have been corroborated by a key stakeholder.

On the eve Kıvanç in the company of his friend Çağatay Ulusoy was spotted in one of the clubs in Istanbul. The men’s company celebrated the victory of the Galatasaray football club, after which the actor gave a short interview to the Turkish press. Kıvanç said that he returned from a short vacation in Çanakkale, which he spent with his wife. The couple celebrated the 4-year anniversary of the marriage.

Regarding the upcoming projects, Kıvanç admitted that he really wants to work in the theater, but for now, an agreement with the digital platform is on the agenda. A contract will be signed to work in the new show in the near future. It is noteworthy that the actor carefully avoided mentioning the word “Netflix” and this is not accidental. The PR strategy of international platforms assumes that statements about future TV shows and the stars are announced by the platform itself.

However, according to the well-known journalist Birsen Altuntas Kıvanç Tatlıtuğ warmly looks at the project, that has been prepared for a long time by the main producer of OG Medya, Onur Guvenatam, known for the series Atiye / The Gift starring Beren Saat. The series is being developed for Netflix. Recall that previously it was reported that the company OG Medya will do two shows for the platform: the adaptations of the books by Gülseren Budayıcıoğlu “Girl behind the Glass” and “If the King Loses”. It is also known that for the first adaptation the producer was in talks with Tuba Büyüküstün. Whether this is a project of Kivanç, or he will star in other show is not yet known.

Another good news is a film in which Mr. Tatlıtuğ intends to work this summer. As he admitted, this is a very different story, and he likes to embody different characters on the screen, so he would like to work in this film.

When will we find out the details of the new series of Kıvanç Tatlıtuğ? What movie was he talking about? Who will be his co-star in the new project? We’ll find out soon enough.