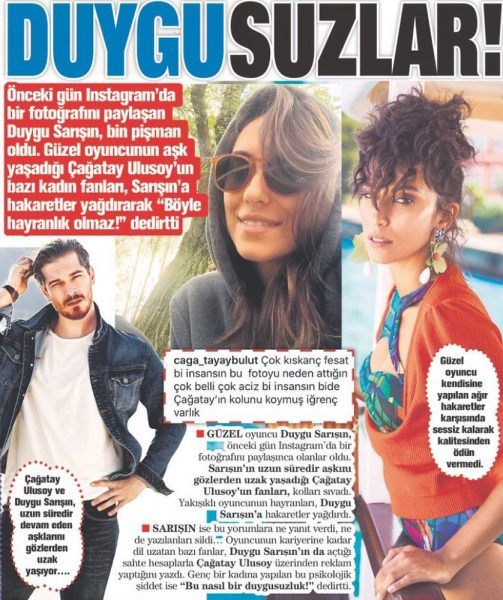 Fans of Turkish superstars do not traditionally like their life partners, and often exceed the limits of decency by openly demonstrating their attitude towards them. This time, Duygu Sarışın, who has been living with one of Turkey’s most popular actors, Çağatay Ulusoy, for three years, became their target.

The Turkish press was outraged by the behavior of fans of Çağatay Ulusoy, who, in response to the publication on Instagram of his beloved Duygu Sarışın, brought down a stream of insults on the girl. The fans also accuse her of promoting her career at the expense of a superstar.

Duygu did not answer the insults and did not delete them. However, journalists supported the actress, accusing Çağatay’s fans of psychological violence. According to the press, such fanaticism has nothing to do with love for the actor, but rather is a manifestation of mental instability.

We remind you that Çağatay never comments on his personal life, preferring to keep his distance with both the press and fans. Probably now it will become even more private. While he and his beloved remain away from prying eyes in his villa in Zekeriyaköy, trying to maintain a distance and not accepting guests. According to the press, on quarantine Çağatay is working on the scenarios of his future projects, as well as maintaining his athletic form while playing basketball. We remind you that in the past, Çağatay dreamed of a career as a basketball coach.

What kind of projects is the actor preparing? How will his relationship with his sweetheart continue? Do the fans wait for their wedding or do they go their separate ways after the quarantine? We will learn about all this in the very near future.