Which Turkish actresses will return to the screens in 2021? 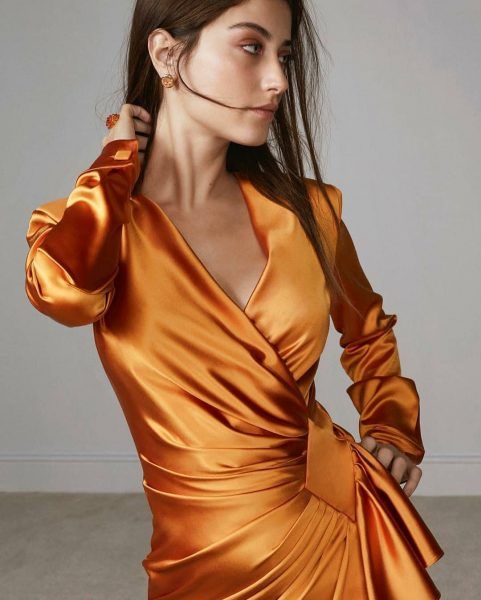 Do you want to know if your favorite Turkish actresses have any new projects? We tried to find information about the plans of the stars in the new year 2021. So, will Hazal Kaya, Beren Saat, Tuba Büyüküstün, Fahriye Evcen, Serenay Sarikaya and many other favorite stars return to the screens?

Hazal Kaya – despite the fact that the actress became a mother last year, she does not intend to take a break in her career. In the summer, Hazal starred in the film “What Can I do” with Onur Tuna. The film will be released on one of the digital platforms. A new Karga 7 Pictures series for Netflix “Pera Palas” in which Hazal will play the role of a journalist and time traveler is about to begin filming. Her character goes back in time and meets Agatha Christie, Mustafa Kemal Atatürk and other famous people.

Tuba Büyüküstün – took a long career break, acting only as a guest star in the Netflix series by Karga 7 Pictures “Rise of Empires: Ottoman”. More recently, OGM Pictures producer Onur Guvenatam announced that he is going to shoot a new series with the superstar. The Turkish media immediately published information that it would be a film adaptation of the novel by the famous psychologist Gülseren Budayıcıoğlu. However, Tuba hastened to correct the press, informing her Instagram followers that she has not yet signed a contract and was in the process of negotiating.

Beren Saat – has an exclusive contract with Netflix, which means only one thing: we will not see a star on television, at least until the release of the last season of the Gift series, the shooting of which has already been completed. We can only hope that this will happen as soon as possible and Beren will be available for a new work.

Serenay Sarıkaya – so far nothing is known about the further plans of the actress. For three years she was preparing for a film about the life of the famous singer Bergen, however, according to official information, the project was abandoned by the production company TAFF Pictures and the scriptwriters of the movie decided to continue working on their own. Whether this means that Serenay also left the cast of the film is not yet known. The actress said that next year she has a new series on the digital platform, but the details are not yet known.

Fahriye Evcen has already expressed her desire to return to the screens on several occasions, but so far caring for her son and the pandemic interferes with the implementation of these plans. However, as the actress said in her last interview, negotiations for a new project are already underway and when certainty appears, she will personally announce a new project.

Burçin Terzioğlu – after Ozgu Namal left the series of the digital platform Exxen The Void, producer Mustafa Uslu signed a contract with Burçin. Filming has already begun and fans will see their favorite actress on screens in January 2021.

Bergüzar Korel – announced that she is not going to return to the screens in the near future due to the pandemic. The actress prefers to stay at home and take care of her sons. After the end of the pandemic, she will consider new proposals, but prefers digital projects, since the busy schedule of filming on television no longer suits her.

Afra Saraçoğlu – got a serious chance in her career along with her role in the biggest historical series of the digital platform Blu TV Yesilcham, becoming a co-star of Çağatay Ulusoy. As you know, every work of the actor becomes an event and for Afra this is a great chance to move from being a talented starlet to the rank of a full-fledged star of the Turkish screen.

Hazal Filiz Küçükköse – started filming in the historical series of the digital platform Exxen Yavuz, where she will play the mother of Sultan Suleyman the Magnificent Hafsa Sultan. Cengiz Coşkun, familiar to many from the TV series Resurrection Ertugrul, will become her co-star. The series is scheduled to premiere in January 2021. Filming will take place in the same set where the Magnificent Century series was previously filmed.

Gökçe Bahadır – in January 2021, she will start filming the new Netflix series “The Club”, where Barış Arduç and Salih Bademci will be her co-stars.

Pinar Deniz – has signed a contract to star in the Ay Yapim series “Competition”, but it is not yet known when the shooting will begin, as well as who will be her co-star. Earlier it was reported that Kaan Urgancıoğlu will star in the TV show, but now the situation has changed and perhaps Kaan will not be in the cast.

İrem Helvacıoğlu – currently starring in the series “I have been waiting for you” with Ozcan Deniz. As you know, Ozcan is one of the most talented actors and producers in Turkey, and most likely, this work will allow Irem to consolidate her status as one of the brightest young stars of the Turkish screen. The series is slated to premiere in January 2021.

Alina Boz became the star of the new TIMS & B series “Maraşli” with Burak Deniz, which is scheduled to premiere in January 2021. Also don’t miss the premiere of the second season of Netflix series “Love 101”.

Bahar Şahin – was forced to leave the series “The Good Family Man” after she contracted the coronavirus. Now the actress feels well, she changed her agent and perhaps very soon he will find her a new role.

Büşra Develi – became the protagonist of the ATV fantasy series “Striker” with Şükrü Özyıldız, which is scheduled to premiere in January 2021.

Miray Daner –  is negotiating with Netflix to star in the new series. Also, the digital platform Blu TV renewed for the second season the series “Respect”, in which she starred with Boran Kuzum. It is not yet known when the shooting will begin.

Özge Özpirinçci – reads the script of the new series, which she really liked. As the actress admits, if the negotiations are successful, she will return to the screens in the winter or spring season.

Selin Şekerci – became the second co-star of Çağatay Ulusoy in the historical series “Yeşilçam”, dedicated to the flourishing of Turkish film production in the 60s of the last century. As it became known, Selin will play the singer.

Hande Doğandemir – has joined the cast of the Exxen digital platform series “The Void”, which is filmed in Izmir. The plot focuses on the story of lawyers who defend women victims of violence.

Ozge Gurel – recently changed her manager, joining one of the most successful agencies. Her new manager, Engin Aykanat, quickly found her an interesting work. It is known that the actress will return to the screens in a new drama series.

Songül Öden will star in the Exxen series “Dear Sir” with Haluk Bilginer. She will also become the protagonist of the new Netflix film “Love Me Strongly”, where Ercan Kesal and Sarp Akkaya will be her co-stars.

It seems that in the new year digital platforms will give us a lot of pleasant surprises and the much-awaited returns of our favorite stars. But television should not be disregarded yet.