Hande Erçel’s smile is worth a million 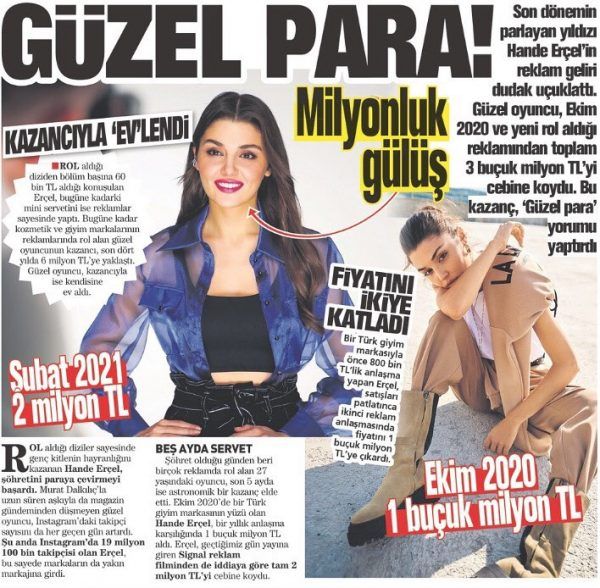 In just three months, one of the brightest stars of the Turkish screen, Hande Erçel, earned 3.5 million Turkish lira. It seems that nothing can prevent the actress’s rapid ascent to the top of Turkish show business.

Hande Erçel is considered to be one of the most beautiful women in the world. Despite the fact that there are no high-profile greatest hits in the girl’s career yet, she is one of the most beloved Turkish actresses, the number of her Instagram followers is rapidly approaching 20 million. Not surprisingly, the young star is one of the most desired faces for advertisers, which means the girl makes millions.

And this is confirmed by the Turkish press, reporting that Hande Erçel, who earns 60 thousand Turkish lira per one episode of the TV show, earns astronomical sums in advertising contracts. Over the past 4 years, the earnings of the actress have come close to 6 million Turkish lira.

Hande, who struck an 800,000 TL deal with a Turkish clothing brand, raised the contract price to  1.5 million TL in a second year as the brand’s sales skyrocketed. For advertising Signal toothpaste, the actress will earn 2 million Turkish lira.

Meanwhile, the series Love is in the air starring Hande Erçel continues its broadcast on Turkish television. The project does not rank high, but its position does not cause concern. Besides the series has excellent sales abroad. It seems that with such numbers the show is going to make it to the end of the season in May. And then Hande will probably work on digital platforms.