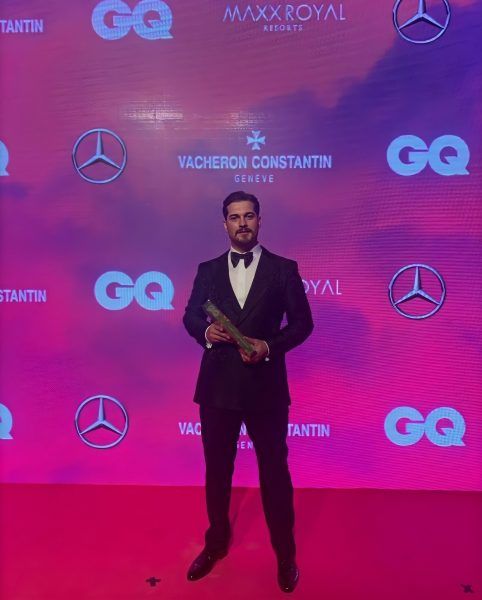 He does not like PR and almost does not speak with reporters. However, every appearance of Çağatay Ulusoy in public causes a real sensation. This time he managed to surprise even veteran reporters.

The awarding ceremony of the world-famous GQ MIDDLE EAST magazine MEN OF THE YEAR 2019 was held in Abu Dhabi on October 7. Among the big names of Oscar nominees, Nobel Prize nominees and famous singers, fans were especially pleased to see the Turkish star. Çağatay Ulusoy, whose latest series Hakan: Muhafiz / The Protector became a hit on the Netflix platform, received a well-deserved award as the “TV Star of 2019”.

According to the editors of the popular publication, Çağatay is the person who can significantly change the rules of the game, he can challenge and change the existing status quo. He is a new hero who already has two released seasons of the series The Protector, two seasons will be released soon. Furthermore, Çağatay Ulusoy develops his own projects, he is engaged in writing scripts and directing. We can say that he is a triple threat to many recognized stars.

In his speech, the actor thanked the entire team of GQ magazine for the award. They gave him an unforgettable evening. This is his first international award. For 20 years, Turkish series have been conquering the world, and he is very happy that this helps to establish friendly relations between Turkey and the rest of the world, especially in the Middle East. Çağatay shared the award with his family that raised him as a good person and with his team, including the manager and PR agent.

The award was also given to a Canadian-born actor of Egyptian origin and the star of Guy Ricci’s movie “Aladdin,” who has grossed more than a billion dollars at the box office, Mena Massoud; Egyptian footballer, striker of the Liverpool club and Egypt national team, Mohamed Salah; a famous singer who has sold over 80 million CDs around the world Cheb Khaled; the models Alessandra Ambrosio and Mariano di Vayo; Oscar nominee and winner of the Golden Palm of the Cannes Film Festival Nadine Labaki, and the world-famous Arab poet Adonis.