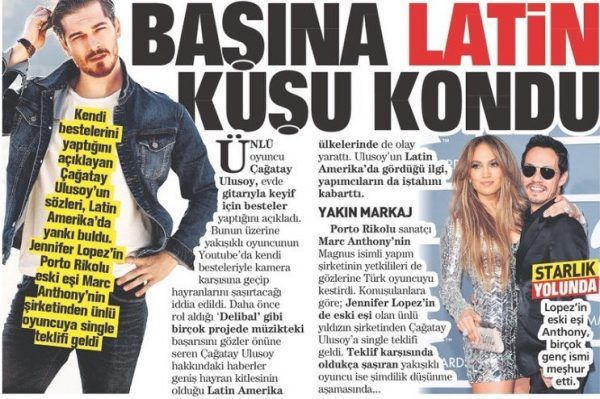 The famous Latin American singer and producer Mark Anthony made an unexpected offer to Çağatay Ulusoy. However, it is not yet known whether the Turkish actor will accept it.

According to Turkish media, Çağatay Ulusoy decided to upload self-composed songs on the official YouTube channel. Note that the channel has existed since 2014, but was rarely updated. It seems that everything will change soon. Recall that Çağatay in a recent interview admitted that he makes music at home, but did not think about the professional career of the singer. However, his song from the movie Wild Honey / Delibal became a hit on YouTube and already has 42 million views, that is the best result among all Turkish actors except Ozсan Deniz (but he is a professional singer).

According to the tabloid Takvim, after this information, Çağatay received an unexpected offer from Latin America. Record company of former spouse of Jennifer Lopez Mark Anthony invited the actor to release a single. As you know, he is very popular in Latin America, and not only among fans of Turkish TV shows. After the release of the Netflix series  Hakan Muhafiz / The Protector Çağatay gained recognition even in those countries where Turkish TV shows are not very popular, for example, in Brazil.

International producers did not remain indifferent to the excitement among the numerous fans of the Turkish actor about his possible musical career. The proposal from Mark Anthony seems quite logical. Recall that Mark is a popular singer (his three songs on YouTube have a billion views) and composer. As a producer, Mark is known for discovering new talents, so his interest in the Turkish superstar is justified.

However, while Çağatay took time to think, he did not give an answer. Note that the proposal does not look like the usual rumor, which is so famous for the Turkish press. A few weeks ago, manager of the actor Engin Aykanat visited Los Angeles and Mexico. Moreover, another client of his agency, Serel Yereli, is already working in the UK with the Sony label, so the information looks quite plausible.

Will Çağatay accept Mark Anthony’s offer or prefer to focus on his acting career, we will find out very soon. Do not forget that he is preparing his first film as a director and screenwriter, so the Turkish superstar does not have much time.