Neslihan Atagül to play with the Oscar winner 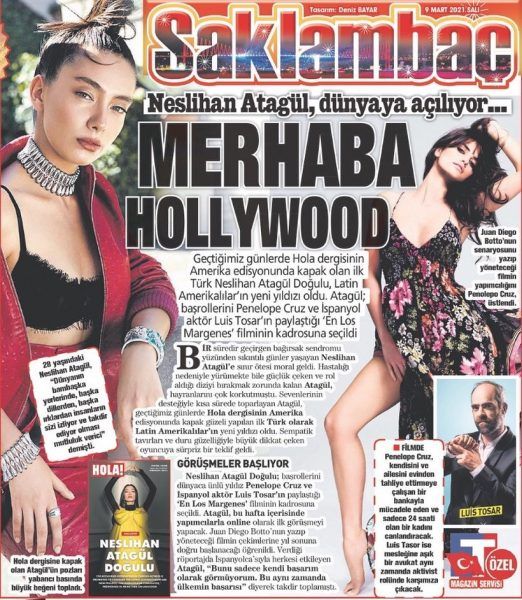 Neslihan Atagül to play with the Oscar winner

Neslihan Atagül successfully overcame the problems that led to her resignation from the series Ambassador’s Daughter / Sefirin Kizi. Moreover, as it turned out, this departure gave an unexpected boost to her career. The next stage is an international film!

Good news for fans of Neslihan Atagül. The actress is feeling better and is already preparing for a new work. As we reported earlier, the star’s new project will be a foreign film, in which she will play along with the Academy Award Winner (Oscar) Penélope Cruz and Spanish actor Luis Tosar.

The Turkish press is vying with each other that the film On the Fringe / En Los Margenes is the road to Hollywood for the Turkish actress. However, this is not quite true. The Spanish director Juan Diego Botto is the scriptwriter and the creator of the movie. The film is made not by American, but by Spanish filmmakers.

Filming will begin at the end of the year. This week Neslihan will have her first online meeting with the project team. It is reported that the events in the movie will take place over the course of one day. Penélope Cruz will appear on the screen as a woman who is trying to avoid eviction, while Tosar will play her lawyer. According to rumors, Neslihan may play the role of the daughter of the main character.

The Turkish press continues to vigorously discuss the reasons why Neslihan Atagül left the series Ambassador’s Daughter / Sefirin Kizi, but it is clear that this decision was good for the actress. She appeared on the cover of an American Spanish-language magazine HOLA!, and now, here’s a role in an international project.