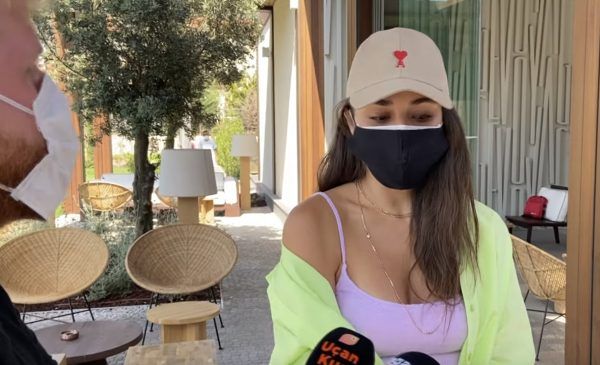 In her last interview with Turkish journalists, Hande Erçel clarified when the series Love is in the air / Sen Çal Kapımı would end, whether she has a new project, and also when she began a romantic relationship with Kerem Bürsin.

Hande Erçel is now in Bodrum with her family and boyfriend Kerem Bürsin. Kerem is shooting an advertisement for Lipton tea there, Hande is doing a photo session with her sister. As the actress said in an interview, their relationship with Kerem began quite recently. As she promised, when love begins, journalists would immediately find out about it, and it happened. At first, they were good friends, then the relationship grew into something more.

Hande and Kerem plan to finish their work on the series Love is in the air soon. It is planned to shoot 11 more episodes of the project and finish this story beautifully. She has never worked on such a role before. After the completion of the project, they’re going on a vacation that they deserve.

Hande also hinted that she has plans for a new film, but she does not want to guess anything, since work on the series Love is in the air continues. She would like to work in a good movie. The actress has no prejudices, if the role is interesting, she will play any character. What are the further plans of the star, we will find out after the end of the filming of the romantic comedy.