Success of the series ‘Midnight at the Pera Palace’ on Netflix 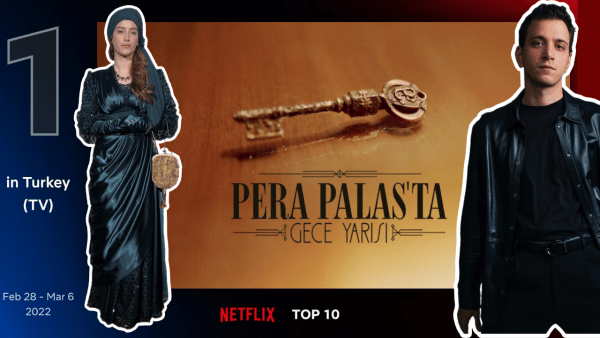 Great news for fans of Hazal Kaya and Selahattin Paşalı. The series “Midnight at the Pera Palace” is a success on the digital platform Netflix all over the world. And this can lead to the most unexpected consequences for the production of Turkish digital series.

The series “Midnight at the Pera Palace”, which was released on Netflix on March 3, caused a very mixed reaction on the social networks of Turkey, but was very warmly received in the world. As its creators admitted, they expected to make a project that would be watched not only by Turkish, but also by world viewers, and foremost by Netflix viewers, and they quite succeeded.

For the first time since the publication of official ratings, a Turkish series has not dropped out of the list, but on the contrary, it has added viewers and climbed in the ratings, and this can safely be called an excellent result. In total, the series had 25,470,000 hours viewed. So far, this is the best result among all the Netflix Turkish series for which statistical data is available (the TV series The Protector, The Gift, Rise of Empires: Ottoman, are not included in the analysis, since the platform has not yet provided rating data for them).

It is curious that criticism in social networks and some Turkish media categorically does not coincide with the real results of viewing, not only in the world, but also in Turkey itself. So, judging by the ratings, the Netflix viewers worldwide and even in Turkey watched more “Midnight at the Pera Palace” than the series “The Club” and “Ethos” which were hailed in social networks as masterpieces.

It seems that Turkish journalists should pay more attention to objective indicators, and not to the subjective opinion of someone, as their foreign colleagues do. It is noteworthy that the reviews of the foreign press about the series are admiring. Thus, the authoritative American publication Hollywood Insider highly appreciated the project of Turkish filmmakers, recognizing it as one of the best series that clearly showed its love and effort to the craft of murder mysteries and time-travelers alike.

Well, Turkish producers who want to succeed at the global level should consider this experience and refuse to take into account the opinions of users of social networks. It, as we have seen in this example, does not reflect the opinion of Netflix users even in Turkey. However, this is not so unexpected: television series very often praised in social networks have meager ratings on television. In this sense, history repeats itself over and over again.