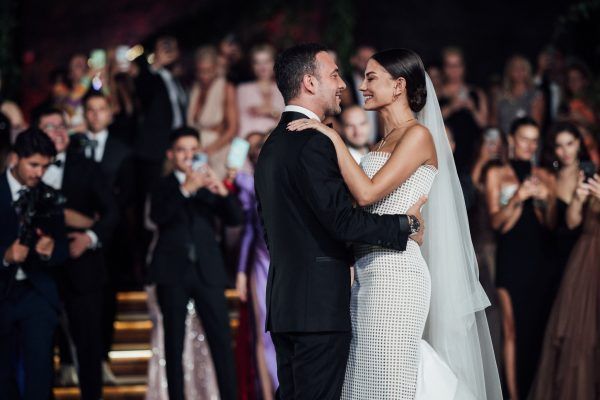 On Sunday, fans of Demet Ozdemir could congratulate their favorite star: the actress was married to her fiancée Oguzhan Koç. Demet’s modest and stylish outfits made a strong impression on the Turkish media.

On Sunday, August 28, the long-awaited wedding of Demet Ozdemir and her fiancée Oguzhan Koç took place at the luxurious Six Senses Hotel. It is noteworthy that the wedding was originally supposed to take place on Friday, but due to heavy rain, the celebration was postponed for two days.

The producer of the Gold Film company Faruk Turgut, with whom the actress worked in the TV series “Smell of Strawberries”, “Number 309” and “The Daydreamer” was the bride’s witness. In his interview to the press, he admitted that Demet is very important to him, and he is glad that he could be with her on this special day. The groom’s witness was the owner of the TV8 channel, the well-known TV presenter Acun Ilicali.

Demet changed 3 dresses at the ceremony. Initially, the happy bride appeared at the wedding in the dress of Eda Gungor. She then continued the evening in an elegant wedding dress by Nihan Peker. The event ended with a dress from the brand Alexander McQueen, which was brought from London. Turkish media are actively discussing Oguzhan Koç’s gift to his wife – a Bulgari necklace worth 47.5 thousand euros.

Invited guests competed with each other in the elegance and boldness of outfits. Two former co-stars of Demet Ozdemir, Furkan Palali and Ibrahim Celikkol, were also invited at the wedding celebration. They congratulated the bride.