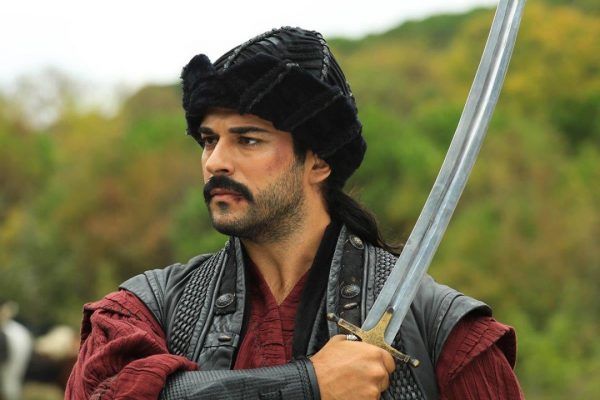 On November 20, Turkish viewers will see the premiere of the new series The Ottoman / Kuruluş Osman. It is a sequel of the famous hit of the last five seasons Resurrection Ertuğrul. Alas, many heroes we love, and most importantly Ertuğrul Bey himself, left the show. But we are waiting for a meeting with a new cast. Who will play the leading roles in the new series and what characters do they have to play?

Burak Özçivit – Osman Gazi. The founder of the Ottoman Empire. This name had been revealed from the very beginning of the project. Burak faces with the difficult task of convincing the audience that the generational change in the series was successful and that he is a worthy actor as his predecessor Engin Altan Düzyatan. Recall that earlier the actor already played a fearless warrior Bali Bey in the series The Magnificent Century. This time, his hero will unite separate Turk tribes into a state, becoming the first sultan of the newly created empire.

Özge Törer – Bala Hatun. 20-year-old student of Muğla University has become a co-star of Burak Özçivit. Previously, the girl never worked in the Turkish series, appearing only in a small television show as a host. According to history Bala Hatun was the second wife of Osman Gazi, the daughter of Şeyh Edebali. It seems that the creators of the series made her the main character of the project and the only love of Osman.

Ragıp Savaş – Dundar Bey. He will play the uncle of Osman Gazi, with whom the later will compete for the right to become the leader of the newly created state. Ragip is a well-known theater actor, as well as the head of the Izmit Arts Center.

Ayşegül Günay Demir – Zühre. Also, a well-known theater actress. Zühre became the mother of the Kayi tribe after the death of mother Hayme and wife of Ertuğrul Bey. She longs for power for her children and husband, therefore, intrigues against Osman.

Nurettin Sönmez – Bamsi. All fans of the series Resurrection Ertuğrul will be pleased to see their favorite hero again on the screen. He is one of the few actors of the previous project who will continue to work in the new show. As one of the Kayi warlords, Bamsi is a friend and mentor of Osman.

Saruhan Hünel – Alişar Bey. One of the veterans of the Turkish screen, who is well known and loved not only in Turkey, but also abroad. In recent years, he almost did not appear on television, so his return will be  pleasant to his fans in the Middle East, where he is especially loved. Alişar Bey is the head of the Germiyanoğlu tribe and the head of Kütahya. There are close friendships between Germiyanoğlu and Kayi, but he longs for power. Moreover, he has a special interest: the beautiful Bala Hatun.

Seda Yıldız – Şeyh Edebali. A theater actor who has been active in television. He is familiar to Turkish viewers from the series Wolf Valley / Kurtlar Vadisi Pusu and the Bandits / Eşkiya Dünyaya Hükümdar Olmaz. Şeyh Edebali is the spiritual mentor of Osman and his father-in-law.

Alma Terziç – Izadora. Bosnian actress who has been working in Turkey for a long time. Known to viewers on the TV show “A Matter of Honor” / Şeref Meselesi. Izadora is a strong woman who has a weighty word in Byzantine politics.

İsmail Hakkı Ürün – Samsa Çavuş. Not only an actor, but also a successful producer who stood at the origins of modern Turkish television and worked abroad. Samsa Çavuş is one of the Kayi warlords. Brave and fearless warrior.

Abdül Süsler – Kalanoz. Theater actor, acting teacher, known for his work behind the scenes (he voiced many foreign films and series). Kalanoz is the Byzantine warrior and secret agent.

Serhan Onat – Aybars. Graduate of the theater department of the University of Anadolu. Aybars is the son of Bamsi Alp. He is older than Osman, however, he recognizes the intellectual superiority of his friend and always supports him. He is in love with Burçin Hatun, with whom he is going to get married.

Aslıhan Karalar – Burçin Hatun. The winner of the Best Model of Turkey 2017 competition. She studied acting in London and Los Angeles. Burçin Hatun is the future wife of Aybars and best friend Aygul who is in love with Osman.

As we see, almost all the actors in the Ottoman cast have theatrical experience. Producer Mehmet Bozdağ prefers to work with experienced personnel who can convince viewers of the reality of what is happening. But he also gives young actors the opportunity to prove themselves. Will they be able to justify the confidence of the producer, we will find out very soon.