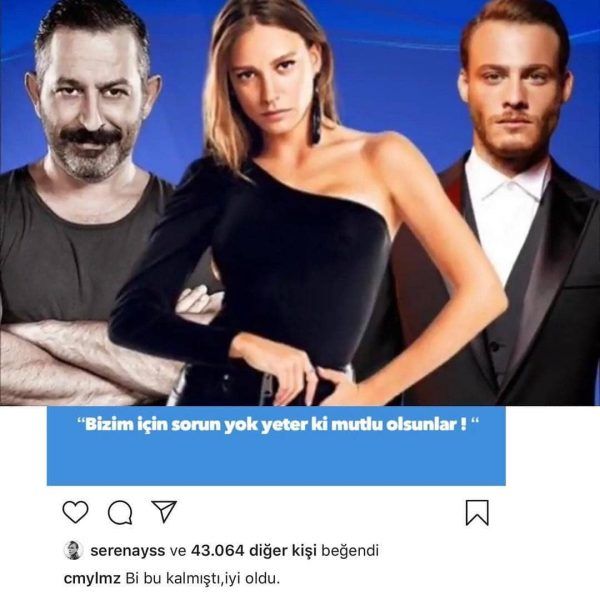 Cem Yilmaz and Serenay Sarıkaya remain the focus of much debate both in Turkish social networks and in print media. This time, a scandal erupted around the name of the former boyfriend of actress, Kerem Bürsin. What happened?

After Serenay Sarıkaya confirmed her relationship with Cem Yilmaz, the Turkish press exploded with statements from ex-girlfriends of the comedian. His previous mistress, Defne Samyeli, directly accused Serenay of taking her man away, admitting that she did not know about Cem’s betrayal to the last. For the time being, Cem himself avoids giving a clear answer to the press, escaping with jokes.

Turkish paparazzi were impatiently waiting for a new scandal, trying to get spicy revelations from ex-boyfriend of Serenay. However, Kerem Bürsin chose not to engage in polemics and answered the questions about the new affair as discreetly as possible: “I don’t want to go into details about this. Honestly, I don’t want to get involved in this issue because it doesn’t concern me. Let everyone be happy and let everything will be fine”.

However, journalists still received the much-anticipated scandal. Cem Yilmaz posted on Instagram the UN logo with the caption “We do not mind if they are happy.” And he added: “That’s all it took, now it’s good.” Serenay Sarıkaya immediately liked the post.

Turkish social networks immediately linked Kerem’s statement and Cem’s joke, expressing the opinion that such a banter seems inappropriate and wrong and looks more like a mockery. Especially users of social networks are outraged by the behavior of Serenay, who supported her boyfriend, laughing at the “ex”. They admit that they are disappointed with the girl’s reaction and expected more tact from her.

How will the new scandal affect Serenay Sarikaya’s future career? Will it damage the reputation of the actress even more? We will find out about this very soon.