When will Hazal Kaya return to the screens? 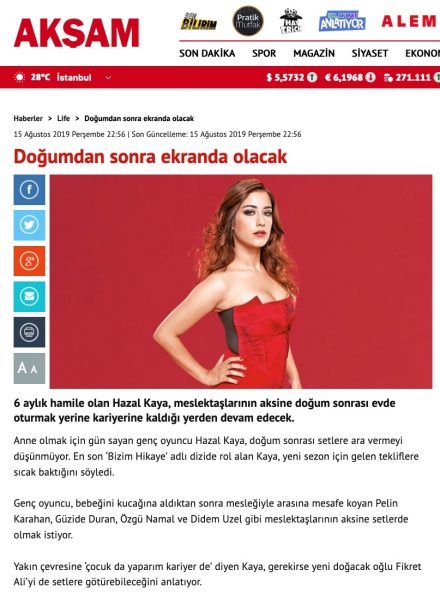 She got married. She is getting ready to become a mother. But Hazal Kaya is not going to give up her career. When will the Turkish star return to the series?

According to Aksam magazine unlike her colleagues, Hazal Kaya is not going to take a career break due to the birth of a child. Now the actress is in her sixth month of pregnancy, however, she will resume shooting as soon as possible. She is ready to take a newborn son to the shooting, if necessary. Hazal believes that she can combine a career and a family, and in order to take care of a child she does not have to stay at home. The actress is already preparing for work in the new season.

It is not yet known whether that information is correct because Turkish tabloids very often publish gossip and rumors, which are subsequently refuted. However, Hazal herself in her last interview stated that she did not consider pregnancy and future motherhood an obstacle to her acting career. Perhaps she is really ready to return to the screens of Turkey faster than many assume. We can only wait for confirmation of this information from the star herself or her manager.