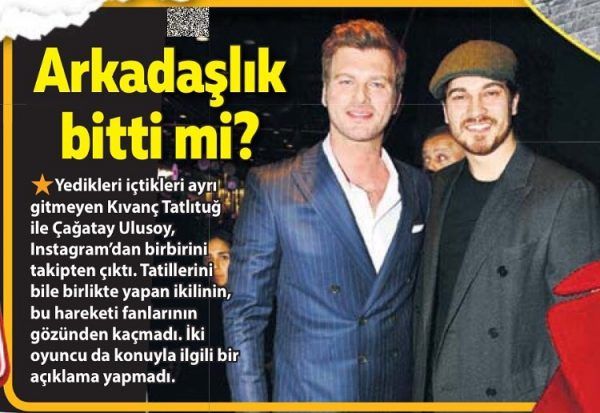 The huge success of the film Paper Lives, starring Çağatay Ulusoy, immediately attracted the attention of the Turkish tabloids. However, the paparazzi, instead of talking about the success of the movie in the world, began to discuss the burning topic of friendship in social networks.

Despite the fact that social media users only laugh on the “quarrel” of Çağatay Ulusoy and Kıvanç Tatlıtuğ (fans immediately indicated that they had not followed each other on Instagram), Turkish journalists decided to go all the way, publishing information that the actors allegedly unfollowed each other. And they are looking forward to when the stars will explain what happened.

We remind you that a year ago Kıvanç explained that his friendship with Çağatay is not determined by Instagram. And the demand for an “explanation” looks even more ridiculous: why should anyone report to the press about their actions? Moreover, if they did not exist at all.