Burak Özçivit was received by the president Recep Tayyip Erdoğan 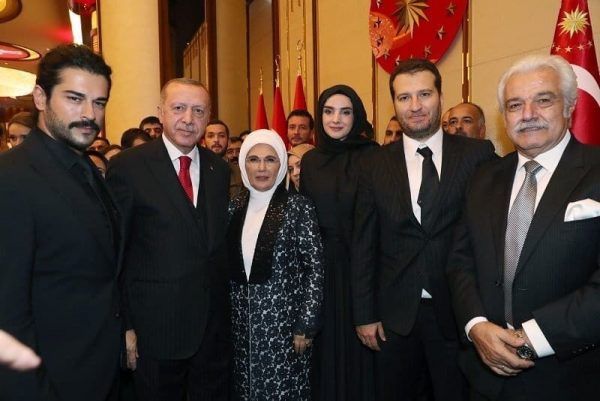 Burak Özçivit  was received by the president Recep Tayyip Erdoğan

On October 29, Turkey marked the 96th anniversary of the founding of the Republic of Turkey. On the occasion of the national holiday, a presidential reception was held in Ankara, which was also attended by artists. Among those invited were Mehmet Bozdağ with his wife Asli Zeynep Peker Bozdağ, Burak Özçivit, Bulent Inal and many others.

Note that President Erdoğan is an avid fan of the TV series Resurrection Ertuğrul, he has been on the set more than once and hosted the project team. As Mr. Erdoğan admitted, he watches the series with his big family, including his grandchildren. Not surprisingly, he, like the rest of the audience, is looking forward with great impatience to the continuation of his favorite project – the Ottoman series. The President has already met with the leading actor of the new show, Burak Özçivit, who has a difficult task to meet the expectations of fans of the historical saga about the life of the founder of the Ottoman Empire.

Whether the new series is waiting for success, we will know very soon. On November 13, the series Lifeline / Sen Anlat Karadeniz will make the final and according to rumors, the premiere of the new hit of the ATV Channel The Ottoman / Kurulus Osman will take place on November 20. However, Mehmet Bozdağ is famous for not releasing the show until he is fully confident in its quality, so that the date of the premiere can be rescheduled. We can only hope that the creators of the series will justify the hopes that rest on them.