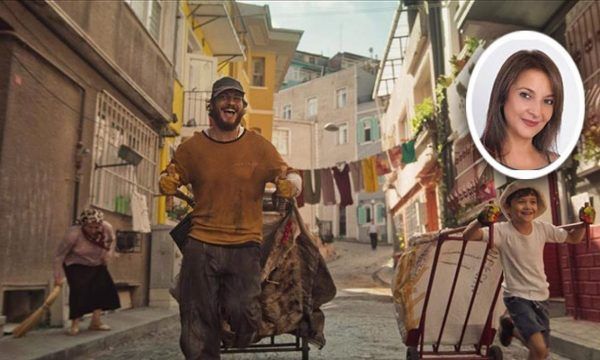 The famous journalist Ece Er, having watched the film Paper Lives / Kağıttan Hayatlar, was really excited. In a big article, she talks about the success of the movie, that trends 2nd among the most popular Netflix films in the world, and she hopes to take the first position as well. This is truly the royal appearance of Çağatay Ulusoy. For 2.5 years we wondered why Çağatay was gaining weight,  what project he would do next, and finally we received an answer to our questions.

Talking about the project itself, Ece recalls her own experience, her district of Cihangir, in which the film takes place, how close and understandable this story is to her. Believe it or not, there are people with higher education among cardboard collectors. The life is hard.

However, the main subject is still Çağatay. When Ece, during the filming of the series Tide / Medcezir, wrote that she considered the actor a candidate for Hollywood stars, she was laughed at. A couple of years later, the same people published the news “Çağatay Ulusoy – the road to Hollywood”. The young actor emits light, turning into a real artist, he creates, produces, writes scripts, grows in his profession and does not shine with his personal life.

The film Paper Lives can become iconic thanks to its social message. In addition, the movie is extremely successful with a global audience. The journalist deliberately waited several days before publishing the article, making sure that Netflix ratings confirmed her viewing experience. The film stays with you long after the end credits are over.

And also write it down now: for this movie, Netflix, along with Çağatay Ulusoy, will receive an Oscar. The journalist is sure of this, period!