Will Kerem Bürsin make a film about Muhammad Ali? 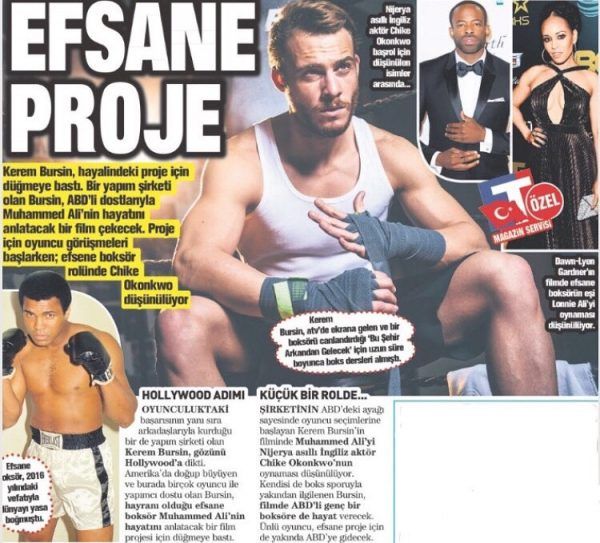 It seems that the line of failures of Kerem Bürsin is over. The actor starred in the new show, works in the film, and  he can go to the United States to shoot the movie, where he will act not only as an actor, but also as a producer.

Some time ago, fans of Kerem Bürsin were quite surprised by his unexpected refusal to star in the TV series Dam / Baraj, which is being prepared by Medyapym TV company. At the same time, the actor admitted that he liked the script, but he had other plans. And now, it seems, the reason for his refusal became clear.

According to the Hurriyet publication Kerem goes to the USA to shoot a film about the famous boxer Muhammad Ali. The film will be shot by Bürsin’s production company, that he founded with his American friends. Kerem himself will also appear in the film, playing the role of an American boxer. An American actor of Nigerian descent Chike Okonkwo is considered for the leading role in the project. Dawn-Lyen Gardner may play the wife of the famous boxer.

Note that Kerem Bürsin grew up in the United States and has friends in Hollywood, so his desire to make a film in America does not look fantastic, but you have to be careful about the information of the Turkish press, as it often reports fake news.

In the meantime, Kerem is busy filming a miniseries for the Internet platform Blu TV Precisely / Aynen Aynen, and also this week will start shooting the film Eflatun, where İrem Helvacıoğlu became his co-star. Moreover, according to the Turkish press, the actor signed a contract with a brand of sportswear.

Perhaps, after the filming of current projects is completed, Kerem Bürsin will go overseas, where he will have to work on his own film. We wish him good luck and follow the development of events.