Why Hazal Kaya’s interview is being discussed on Turkish social media? 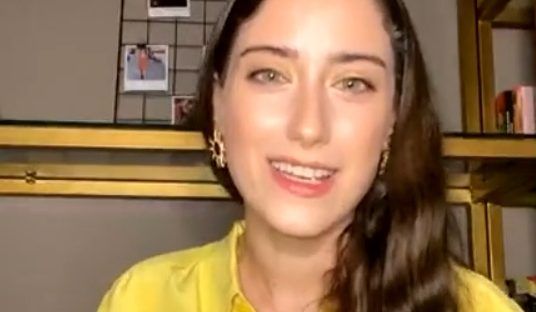 Hazal Kaya recently gave a short online interview, which was heatedly discussed in Turkey’s social networks. We present to your attention the most interesting moments of the interview.

As the actress admitted, she never did plastic surgery. She only had a tooth problem that she fixed. But she really doesn’t like that society demands absolute naturalness from actresses, criticizing aesthetic interventions on the one hand, but adds that the actress is getting older and not as perfect as before. They contradict themselves. While she does not need anything, but if in the future she needs some procedures, she will do them, this is her job. Speaking of work, Hazal clarified that the film is scheduled for July. There was a serious delay due to the coronavirus, but now everything is in order.

Asked by the journalist who are her favorite actors, Hazal Kaya replied that she has a lot of favorites, but there are three actors whose work she always watches with special excitement – these are Aras Bulut İynemli, Kıvanç Tatlıtuğ and Çağatay Ulusoy.

According to Hazal, her character Nihal in the series Forbidden Love was a real victim. Although the girl was very rich, but she could not live a normal life. She was a prisoner in a golden cage. Feriha and Nihal have different lives, but they were both prisoners.

As for Feriha, it turned out that she rejected the offer of Fatih Aksoy to star in the series three times. She thought the story was too classic. Moreover, she was afraid of failure after the huge success of Forbidden Love. But producer Fatih Aksoy convinced Hazal that she would cope with the role. Seeing what a wonderful cast he gathered for the series, she calmed down. After that, she always listens to his opinion.

The most heated discussion provoked the answer of Hazal Kaya to the question of what would be her reaction if she finds out that her son decided to choose to be a gay. Hazal replied that there would be no reaction, since it was not her business. Her son is an individual human being; she cannot command him. She can only be his companion and support. If he needs her help, she will help and support him, because she loves him very much. Everything else does not concern her.