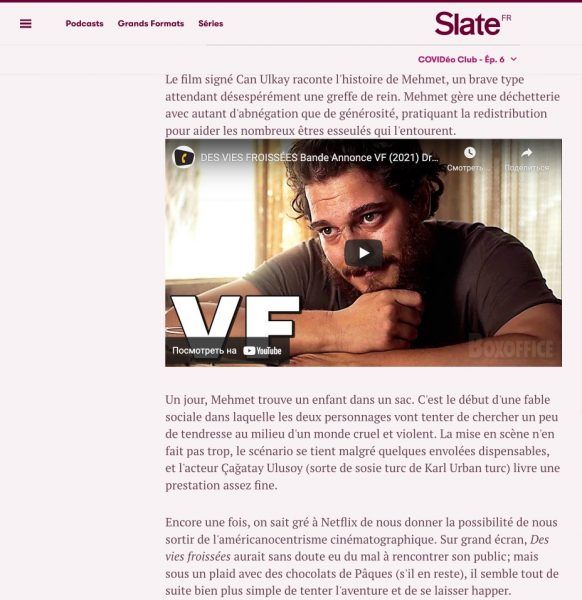 The French version of one of the world’s most popular online publications, Slate, recommends films that can be watched during the quarantine to its readers. The list also includes the Turkish film Paper Lives / Des vies froissées, after watching which, as journalists assure, your supply of tears may dry up, as happened last year with the film Miracle in the cell No 7 / 7. Koğuştaki Mucize. This is the second time in two years that a Turkish film is at the Netflix top, and the movie has become one of the most viewed in the world without any advertising.

Until now, in France, Turkish films were associated only with the laureate of the Cannes Film Festival, Nuri Bilge Ceylan, but it is unlikely that the public would watch his films. The film directed by Can Ulkay is the story of two people who are trying to find a little tenderness in a cruel and dangerous world. The film is rather intimate, the script keeps the audience, despite a few minor problems, and the actor Çağatay Ulusoy (the Turkish version of Karl Urban) creates his character with great delicacy.

Journalists thank Netflix for the opportunity to go beyond American-centric cinema. Perhaps, if the film was released in cinemas, the audience simply would not have noticed it, but sitting at home and eating up the chocolate left after the Easter holidays, it is much easier to try something completely new and unnoticed by yourself to be drawn into an unfamiliar world.